I am happy to admit that I really do not know whether the NSA surveillance program is a good thing or a bad thing. We’ve all heard the pros and cons. On the good side, domestic surveillance (domestic spying) is supposed to keep us safe. It is supposed to be a way in which the powers that be figure out who is naughty and who is nice. They monitor the naughty ones and, in theory, they should be able to nab the bad guys before they blow something up. On the bad side, domestic spying can be a great way in which the government can use or misuse your personal information, information from your personal phone calls and emails, in order to control your behavior. One can easily imagine a scenario in which someone was arrested for something they wrote in which they stated “I hate the president so much I could simply strangle him.” On one hand, this sentence is a death threat. On the other hand, the sentence could simply be someone who has absolutely no intention of harming the president blowing off steam. I guess this really depends on how the government uses the information. If you like the terrorist surveillance program, this NSA surveillance system, you’re required to have trust in the government and to believe that the government is going to act in your best interest. In my opinion, that’s a leap of faith.

No gene patents – The Supreme Court today unanimously struck down patents on BRCA1 and BRCA2, two genes linked to hereditary forms of breast and ovarian cancer, when the genes occur in the body. Myriad did not create or alter any of the genetic information of the BCRA1 and BRCA2 genes, and thus does not satisfy patenting requirements, according to the decision. “Myriad discovered the precise location and sequence of what are now known as the BRCA1 and BRCA2 genes,” Justice Clarence Thomas wrote for the court. END_OF_DOCUMENT_TOKEN_TO_BE_REPLACED

This is pretty over the top. I wonder if there are any single women who work and pay their bills in the US. I wonder if Phillis Schlafly knows any of them..?

One of the things Obama’s been doing is deliberately trying to increase the percentage of our population that is dependent on government for your living. For example, do you know what was the second biggest demographic group that voted for Obama? Obviously the blacks were the biggest demographic, y’all know what was the second biggest? Unmarried women. 70% of unmarried women voted for Obama. And this is because when you kick your husband out, you’ve got to have Big Brother Government to be your provider. And they know that. They’ve admitted it. And they have all kinds of bills to continue to subsidize illegitimacy… The Obama administration wants to continue to subsidize this group because they know they are Democratic votes.

Is this domestic terrorism? A software engineer who was anonymous before today is now known all over the country. It appears that he has intentionally flown his plane into a building that housed the IRS in Austin, Texas. Joseph Stack was a 53-year-old gentleman who set his house on fire before flying his plane into the seven story building.

As I’ve mentioned after all of these tragedies (I’ve been doing this blog now for over four years there’s been the Virginia Tech shooting, the shooting on a military base in Texas, the shooting at the University of Alabama at Huntsville and several others), there will be the psychological valuation by the news media. We will look into this man’s background and ask why it happened. The one thing that seems never to emerge from the mainstream media is that we cannot predict an individual’s behavior. There are plenty of people in the United States who are financially squeezed, who have been laid off, who hate the IRS, who don’t have a girlfriend, who are frustrated with life and who have no intention of flying a plane into IRS building or shooting their colleagues at work. All of this introspection is fruitless.

A software engineer furious with the Internal Revenue Service launched a suicide attack on the agency Thursday by crashing his small plane into an office building containing nearly 200 IRS employees, setting off a raging fire that sent workers fleeing for their lives.

At least one person in the building was missing.

A federal law official identified the pilot as Joseph Stack and said investigators were looking at a long anti-government screed and farewell note that he apparently posted on the Web earlier in the day as an explanation for what he was about to do.

In it, the author cited run-ins with the IRS and ranted about the tax agency, government bailouts and corporate America’s “thugs and plunderers.”

“I have had all I can stand,” he wrote in the note, dated Thursday, adding: “I choose not to keep looking over my shoulder at `big brother’ while he strips my carcass.”

Stack, 53, also apparently set fire to his house about six miles from the crash site before embarking on the suicide flight, said two law enforcement officials, who like other authorities spoke on condition of anonymity because the investigation was still going on. (more…) 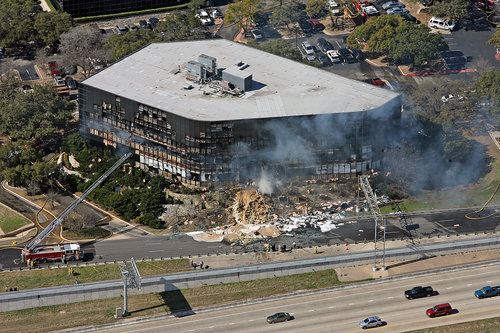 From the Austin American Statesman:

“Well Mr. Big Brother IRS man…. Take my pound of flesh and sleep well,” is the Web browser title on embeddedart.com, the site registered to Stack.

The New Jersey-based Web host that served “EmbeddedArt.com” says it took down the site at the request of the Federal Bureau of Investigation. To see the full story, click here.

The note, which is about six pages of text when printed, begins: “If you’re reading this, you’re no doubt asking yourself, ‘Why did this have to happen?’”

What follows is a rambling complaint about the tax system, how it affects organized religion and corporations, and how at several turns it has derailed Stack’s professional career as a software engineer.

The note says that during the early 1980s Stack participated with others in “tax code readings and discussions” that focused on tax exemptions, such as ones that “make institutions like the vulgar, corrupt Catholic Church so incredibly wealthy.”

“We carefully studied the law (with the help of some of the ‘best’, high-paid, experienced tax lawyers in the business), and then began to do exactly what the ‘big boys’ were doing,” the note says.

The note went on to say: “That little lesson in patriotism cost me $40,000+, 10 years of my life, and set my retirement plans back to 0. It made me realize for the first time that I live in a country with an ideology that is based on a total and complete lie.”

The note does not say what happened to cause those results.

Stack then went to engineering school and later began working as a software engineer, according to the note. Later, the note says, a 1986 tax law setting out new rules for engineers essentially “declared me a criminal and non-citizen slave.” (more…)