When your campaign is in shambles, you’re desperate. You have to figure out a way to become relevant again. Newt Gingrich’s world, by all accounts, is falling apart. Newt hasn’t been a powerful player for more than a decade, yet he’s been able to convince conservative donors that he still relevant. He’s been able to start several political action committees and fill the coffers with millions of dollars. Now those funds have been drying up. So former House Speaker Newt Gingrich decides to run for president. His campaign gets off to a bumpy start when he denounces the Ryan tax plan, which is simply more giveaways to big business and the wealthy. Secondly, his top campaign officials resigned. Thirdly, his fundraisers resigned. If you are a Republican and your campaign begins to falter, you don’t admit defeat. You don’t admit your own mistakes and try to figure out a way forward. Instead, you double down. You increase the rhetoric. You play the race card. This is exactly what John McCain and Sarah Palin did when it was clear that they were losing the presidential race just three years ago.

He explained that “in May, we had 41% unemployment among black teenagers in America.” That means if Republicans can put on a brave face, they might be able to turn the African American vote their way.

“The morning they believe that, you’re going to see margins in percents you never dreamed of decide there’s a better future,” Gingrich said. “It takes courage, it takes hard work, it takes discipline and it’s doable.”

Now, it is clear that the economy is failing minorities. The economy has been failing minorities for well over a decade. The last time the minority community saw significant employment and significant income growth, Bill Clinton was President. Yet, Newt Gingrich did not want to point out that the economy is failing everybody and has been for more than a decade. Instead, he wanted to point out that a black man was failing the Black community. The implication, of course, is that if he can fail the Black community then, of course, he is failing everybody. President Obama has done the best that he can with a recalcitrant Republican Party. They’ve wanted him to have no success. (Remember Rush Limbaugh’s statement) They have thwarted him on every occasion. Every additional stimulus has been voted down. 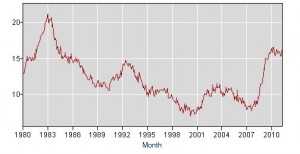 Just think for a moment how President Obama would have been roasted and toasted if he had proposed a targeted stimulus toward the Black community. I wonder what Newt Gingrich would’ve been saying that? The hypocrisy is overwhelming.