The best of the CES (Consumer Electronics Show) 2014. This is strictly a Geek post.

I’m sorry, but buying a cellphone to plug into my tablet? I don’t get it.

This does look cool.

The Best-Spelling of California – Ever 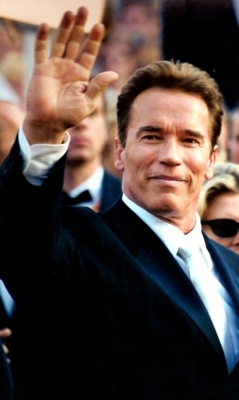 (Editor’s Note: I appreciate everyone who entered this contest. I have added emphasis to this comment for readability.)

Right, do I have to narrow it down to one each? Ah well, okay, here we go.

Hillary Clinton I’ve not spent much time considering mainly because I’m seriously hoping she doesn’t win the nomination. Now I know Wesley Clark is supposedly on the short list, but that seems like a heavy non-starter to me, Wes Clark isn’t a rising star, politically, he’s an also ran with a military background.

I would like Biden, but there’s no regional advantages to be had there. Still, I would say that he should be at the top of the list for a single reason. After spending much of the primaries touting experience, when Hillary Clinton steps up to the plate against someone who really does have decades of experience to show, she may need someone in her corner to combat that. So Joe stays on the shortlist.

I read above someone said Richardson should be the pick. I couldn’t disagree more. He’s got lots of experience, but he’s proven to be a clumsy politician at best, and definitely not disciplined enough nor politically talented enough to be anything beyond a drag on the ticket. Dodd gets similar treatment here as well.

Dodd’s not clumsy, but as much as I thank my stars we got someone as dedicated to the constitution in the Senate, he’s simply just not the kinda guy you want as a running mate. If you could pull a bait and switch and sneak him in as the Veep, yeah, let’s do that, but otherwise, if you put him on the ticket, it’s not going to end well.

So, so far, we only got Joe, a party elder to run in case Hillary wants to go toe to toe with McCain on experience. If she wants to shoot in the other direction, there’s only one choice.

I’m going to pick Barack Obama, but not because he’s my horse in this race. I’m picking him because I’ve heard more than once that Hillary’s not going to be able to win without him, and I think that’s about right. The big deal here is the youth vote, and really just the overall energy of the vote completely. Obama’s proven that he can get the youth vote out unlike any other politician we’ve seen in decades, he draws the biggest crowds, and with Obama at her side, Hillary can switch from an experience argument to a change argument which I think would be more effective with McCain.

So, and since you said enter as often as you like and I’m not interested in writing multiple posts, I’m going to lump them all together. With Hillary I think if you want to work the experience angle (which I think would be silly for her), you pick Biden who’s got the fire and the bona fides to pull it off. If you want the change angle (smarter), go with Obama who’s going to bring massive amounts of voters and energy and organization with him.

If Obama wins, I can think of about three I would want on my shortlist, and I would have a preference.

1) Kathleen Sebelius. Three words, Kansas Turns Blue. Seriously. Apparently Obama is looked upon as a favorite son in Kansas thanks to his grandparents, and Sebelius is a rising star in the party who manages to win in deep red country.

2) Jim Webb, and I saw someone else put him up and they pretty much have it right. Military creds, anti war, great performance in the Senate, and he hails from Virginia which is a red state (though I would have to say purple now), and a Southern state. He would make an excellent attack dog, and he could neautralize much of McCain’s military creds with the exception of the POW stuff.

3) My third choice is probably the weakest one on paper, but my preferred for a simple reason. Tim Kaine, governor of Virginia. Like Webb, we got a popular Democratic governor of a red Southern state who, like Kathleen, is also a rising star in the party. Plus, as we say in the Potomac primary, he has more than enough organization in Virginia to not only make it purple, but guarantee it turns blue.

But here’s the game maker here. I’ve seen Kaine and Obama work together twice now. Once in 05 when Obama campaigned for Kaine when he was running for Governor, and just a week ago when Kaine and Obama packed the Va Beach Convention Center with 18000 people.

You can just tell they work on the same page. They have very similar political philosophies and styles, and where they may differ is exactly to Kaine’s advantage in being the VP pick. When Kaine ran against Kilgore in 2005, he did what Kerry failed to do. Every attack ad that Kilgore or a 527 ran, Kaine had a comeback. I mean, I kid you not, in the same commercial break, you would get an anti-Kaine ad, and then the Kaine rebuttal.

But he never got into the negative himself. He never once flung a speck of mud, and that’s where Kaine and Obama are really alike. Kaine’s got Obama’s positive campaigning thing down, he just puts a harder edge to it to prevent any kind of attack from sticking.

In this way, Kaine would be the perfect attack dog VP slot for the kind of campaign Obama would run. He would never actually attack, but you wouldn’t see a single attack stick on Obama thanks to him.

Finally, he’s got the oratory skills to do the job of running mate. Obama’s good, probably one of the best of our generation, but Kaine can hang with him, and that alone is an impressive attribute.

Now, I know some may say Hillary should be on the list, but let’s be honest, neither candidate is on each other’s shortlist. The only way they would end up as running mates is if Howard Dean really does step in and broker a deal this spring. Barring that, Obama doesn’t need Hillary.

Anyway, that’s about the end of that.