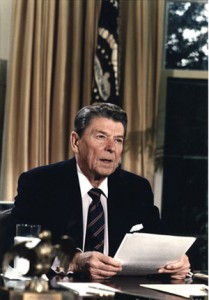 Ronald Reagan supported infrastructure spending. Do you think the GOP cares? I don’t. They only care about defeating Barack Obama. They don’t care about anything else… except lining their own pockets.

So, what we’re proposing is to add the equivalent of five cents per gallon to the existing Federal highway user fee, the gas tax. That hasn’t been increased for the last 23 years. The cost to the average motorist will be small, but the benefit to our transportation system will be immense. The program will also stimulate 170,000 jobs, not in make-work projects but in real, worthwhile work in the hard-hit construction industries, and an additional 150,000 jobs in related industries. It will improve safety on our highways and will make truck transportation more efficient and productive for years to come. American companies have reported record profits for the third quarter of 2010.

From the New York Times–—

“The nation’s workers may be struggling, but American companies just had their best quarter ever. American businesses brought in $1.66 trillion at an annual rate in the third quarter, according to a Commerce Department report released Tuesday. That is the highest figure recorded since the government began keeping track over 60 years ago, at least in nominal or non-inflation-adjusted terms. Corporate profits have been going gangbusters for a while. Since their cyclical low in the fourth quarter of 2008, profits have grown for seven consecutive quarters, at some of the fastest rates in history. This breakneck pace can be partly attributed to strong productivity growth — which means companies have been able to make more with less — as well as the fact that some of the profits of American companies come from abroad.”

What do you think these profits mean for working people?

Who should we blame for the hard times facing the American worker?

What a country this is right now.

I know this sounds like an oxymoron, but stay with me. Joe writes, “…common sense health insurance reform will cost the government little to nothing.” I always liked these common sense solutions. They make me smile. The reason I smile it is that if they were so simple and easy we would’ve tried them already. Congress has been desperately looking for something simple and easy to try for the last 25 years. During this time both Republicans and Democrats have controlled the House and the Senate and could’ve passed “common sense” solutions. Especially, especially if those common sense solutions didn’t require insurance companies or pharmaceutical companies to lose money. Congress would have been all over it.

1. Allow people to band together to buy group health insurance without being an employee-based group.

This sounds nice. You have to find a way to get millions of people to band together, not just a few. As far as I know, Americans have not banded together to buy gas or to buy groceries. Small bands of Americans (a couple thousand) would be almost the same as a small business and its employees. The reason any given small business has stopped covering employees, as a rule, is cost. There’s no way a small band of Americans is going to be able to figure out how to decrease the cost. Now, the exception would be small bands of young healthy Americans. They could easily band together and cover themselves for little or nothing. Basically, this is Kent Conrad’s idea, which has been thoroughly vetted. This is about co-ops. Co-ops will not be competitive because they don’t have the numbers to negotiate drug prices and fees for service.

2. End exemptions for a self-insured plans.

If we are going to end exemptions, why isn’t that the case in the healthcare exemption? The benefit of health insurance is not taxed. Our treasury loses $110 billion every year because of this. This seems to be a much fairer solution, don’t you think?

This will cost millions. It will cost insurance companies and doctors’ offices and hospitals millions of dollars to change from what they have to something else. Who’s gonna decide what the standard is? Clearly, we’re not gonna trust the government to do that, so we are going to wait for business to come up with a committee to do this? Expect a decision in three to four years… and a voluntary implementation of this will never happen. There’s no incentive for business to do this. Unless you want to pass regulations — no way. Conservatives hate regulations.

Cost shifting doesn’t end. Just because you tell them to stop it, doesn’t mean it will end. Hospitals and doctors have incentives to continue cost shifting. They get paid. Personally, as a physician, I’ve been down this road, where we “aggressively” go after those without money and those who don’t pay. The bills simply never get paid off. They end up spending a lot of money trying to track down people who have moved out of state. They end up spending a lot of money on people who are paying $25 and $50 a month on bills that are $50,000 and $100,000 or more. Neither hospitals nor physicians will willingly take this hit.

Remember, we are obligated to provide medical care for those people who are dying. This isn’t like a car dealership. No matter how badly you want a car, if you don’t have cash or financing you don’t get that car. If you come in to the emergency room because of a heart attack or a bleeding ulcer, we take care of you. This is the way it should be. It also should be that we get paid for the services that we render. How we get paid by those who don’t have money to pay is a question that society needs to answer.