The Sequester from a business prespective 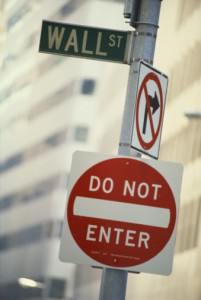 With the Dow Jones hitting all-time highs, I thought that it would be instructive to see what Wall Street thought about the sequester.

A few thoughts from Goldman Sachs:

In 2011, Congress passed and the President signed the Budget Control Act, which raised the debt limit by $2.1 trillion and cut $2.1 trillion from projected spending over the following ten years. Caps on discretionary spending levels were estimated to reduce spending by $900bn compared with baseline projections that assumed spending would growth with inflation. The remainder of the savings was to be achieved by the congressional “super committee.” To motivate the super committee, and to ensure deficit reduction even if it failed, the legislation established $1.2 trillion in automatic cuts through 2021 by means of sequestration if the super committee could not agree on at least that much in deficit reduction. The super committee failed to agree on a deficit reduction package, leaving sequestration to take effect….

The cuts are not that large in the context of the $3.5 trillion federal budget, but sequestration will nevertheless cause real disruptions because the law to implement the cuts is very prescriptive and because they must be phased in relatively quickly once triggered …