The problem in this country is that making money isn’t enough. In the Wall Street environment that we have now, you always have to make more money than you did last quarter and more than you did last year. This is an impossible task to do forever, obviously, but Wall Street punishes those who don’t crank up the money machine. So, the fact that Bank of America is making money ain’t enough. They need to make more money. So instead of doing something like earning it, they thought that abusing their own customers was a good idea. They decided that they needed to charge their customers (who are nothing more than little piles of money) a monthly fee to use their stupid ATM cards.

BOA CEO was crying to reporters the other day:

“I, like you, get a little incensed when you think about how much good all of you do, whether it’s volunteer hours, charitable giving we do, serving clients and customers well,” Moynihan said during the Oct. 18 gathering. To the bank’s critics, he said, “You ought to think a little about that before you start yelling at us.”

Really? That’s what he is bringing to the table. We spend a couple of million on charity so we should be able to rip you off for a couple billion in stupid fees? That’s his argument.

As I mentioned before, Americans are tired of being ripped off by American corporations. Maybe BOA didn’t read my blog. Maybe they don’t care about the fact that the American people are in a terrible bind. They don’t have any extra money.

Fact #1: Bank of America continues to smother job creation by refusing to lend to small-businesses:

Fact #2: Bank of America continues to prefer to kick homeowners out of their homes than do permanent, sustainable loan modifications:

Fact #3: Bank of America — and to be fair, the other big banks too — is actually increasing homeowner indebtedness, not reducing it:

A report by the Congressional Oversight Panel last December found that nearly 95 percent of active, permanent loan modifications resulted in homeowners actually having a higher unpaid principal balance than before the modification. Translation: even those lucky few who manage to get a mortgage modification from Bank of America still end up deeper in debt than when they started. Keep this in mind every time you hear Bank of America or any other big bank tout big numbers of homeowners they have helped — 95 percent of them are deeper in debt than when they started.

Fact #4: Bank of America continues to be a major threat to American taxpayers:

And the threat just grew by trillions of dollars. Last week, federal bank regulators allowed Bank of America to transfer the riskiest of its crumbling assets from an uninsured Merrill Lynch division to the deposit-insured and discount-window-eligible Bancorp division. As Simon Johnson from MIT wrote, “The move puts the Federal Deposit Insurance Corp. on the hook for any losses…because the agency can tap a U.S. Treasury line of credit if the fund runs dry, taxpayers could be at risk, too.” This is an unacceptable shift of Wall Street risk onto the American taxpayers, and some are saying the beginning of another backdoor bailout for Bank of America. 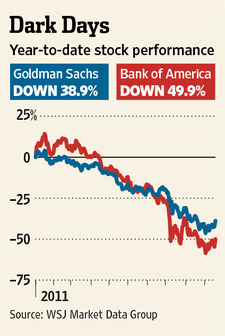 Cry me a river

Someone get me a box of Kleenex. I think I’m gonna have a good cry. Bank of America is no longer the largest bank in the United States. As the American people are suffering, the folks in the financial sector are partying like it’s 1999. Higher profits all around – Citigroup, Wells Fargo and Bank of America have all reported higher profits.

Troy Davis is scheduled for execution later on today. His final appeal has been denied. In my opinion, the question is whether justice be served by executing Troy Davis. Will we be safer?

If you are seen in the company of extremists, does that make you out of the mainstream? Who’s that with Rick Perry? (By the way, I do not play the game of guilty by association. I think the game is wrong and dangerous.)

American hikers who have been jailed for espionage (being stupid beyond belief) have been released from an Iranian jail. Look for them to be hitting all the media outlets by tomorrow morning or late tomorrow afternoon at the latest.

Reports are circulating that the Hewlett-Packard board may be looking to boot out the CEO.

The Fed’s instituting Operation Twist seems to have stocks falling. I’m guessing that investors are not believing in the wisdom of the Fed.

Existing home sales rose in August. This looks like speculators taking advantage of a depressed market rather than homeowners buying houses. If we immediately stop construction on all new homes, we still have an eight months’ supply of empty, unoccupied houses.

Former first Lieutenant Dan Choi who was an outspoken critic of don’t ask, don’t tell was one of the first to reenlist once this awfully destructive law was repealed. Now this is patriotism.

Bank of America, Wells Fargo and Citigroup have all been downgraded by Moody’s. Over the next few days, we should figure out what this means. I don’t see how this can be good for the average American.

Finally, several Republican members of Congress have written Fed Chair Ben Bernanke and have basically asked him not to help the economy. Really? How does this help Main Street? Politicians are always talking about helping Main Street. One of these guys can step up and at least propose something that’s going to help – MainStreet.