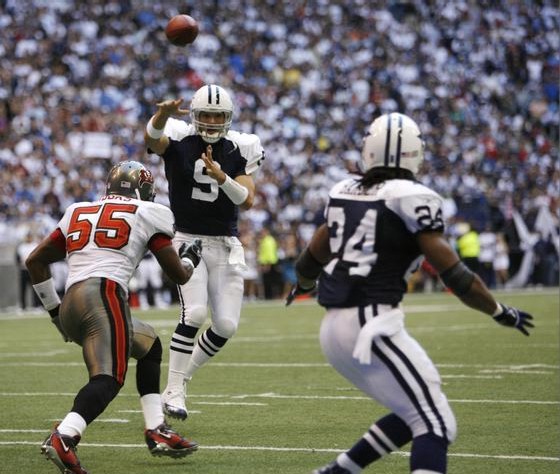 Thanksgiving Day game started as many have in the several years.  There was hope.  Hope for a post season future.  Many Cowboy fans are with me on this.  We have been crushed so many times before.  We haven’t seen a playoff victory in 10 years.  With Quincy Carter we saw the difference that a real coach can make.  We saw a defense that was beginning to gel.  The Cowboys were 10-6 that year.  We went to the playoffs and got kicked by Carolina.  Between then and now we drafted and traded to get a “Parcells” team.  The Cowboys were very close last year.  Don’t look at the final standings but instead look at where we were before Flozell Adams gets hurt.  Look at how we dismantled the Eagles in Dallas.  That was Bledsoe’s best game as a Cowboy.  He hit his throws.  He got the ball out and we looks unstoppable.  A couple of injuries later the Cowboy ship was dead in the water.

Fast Forward.  Bledsoe is out after a terrible performance against a number of teams including the Giants at home.  Romo has come in and has been outstanding.  His numbers are overwhelming.  He has the second best quarterback rating in the league over the last 4 games.  So, are Cowboy fans dreaming?  Is Romo for real?  Oh, yeah, Romo appears to be for real.  He torched the Bucs, on Thursday, like he was supposed to.  We couldn’t run like we wanted to but Glenn, Clayton and finally Owens ran free through the Buc secondary.  Romo was on target, again.  The offensive line wasn’t great but they were good enough to give Romo some time.  Romo, again, moved very well in the pocket.  It is not that he didn’t make mistakes.  His mistakes didn’t cost us that’s the difference.

I’m still not sure that I’m on the bandwagon…yet, but I sure am enjoying the view from this seat!