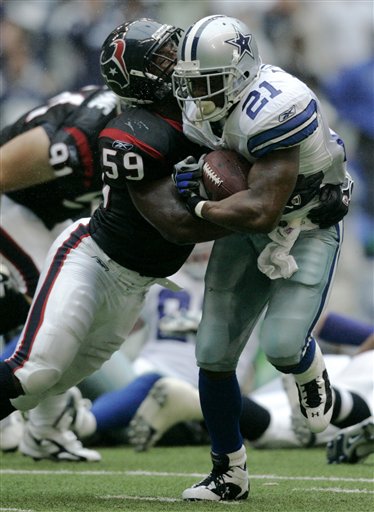 As we have seen a couple of times this year, the Cowboys play different in the first half than they do in the second half.  The Houston Texans had a long drive to open the game but only ended up with a field goal.  The Cowboys defense slowly began to shut down the number one rated passer (David Carr) in the league.  For some unexplainable reason the Cowboys still had problems with pressure in the first half.  People were coming free, again.  Drew Bledsoe enjoyed another forgettable half.

Again, a tale of two halves.  The Cowboys come out and take the opening kickoff and march 68 yards in nine plays which ends with a Terrell Owens touchdown.  This begins a concerted effort by both the offense and defense to actually play football.  The defense created turnovers. The special teams created turnovers.  The offense protected the ball and they protected Drew Bledsoe, what a concept.  When it was all said and done, Terrell Owens, Mr. mouth, Mr. I’m for myself, scored three touchdowns.  Julius Jones had 22 carries for 106 yards.  Even Tony Romo, who came in late in the fourth quarter because the game was out of reach, completed two of two passes for 35 yards and one touchdown (to Terrell Owens, of course.)

Now let’s see which Dallas Cowboys team will come out and play next week.