I know, I know.  I didn’t blog anything last week about the Redskins loss.  Not only was the game a complete disaster but for the subsequent 36 hours I was living in my own disaster which was filled with lies, deception and incompetence.  No, I was not working for the government.  To briefly summarize, I’m flying from Washington, DC to Atlanta and Atlanta to Asheville, North Carolina.  We sit on the plane at the gate for 2 1/2 hours before taking off.  I, of course, miss my flight in Atlanta whose airport is probably larger than Asheville.  My one checked bag has my medicines in it.  Allergies, they are the bane of my existence.  It will take over an hour and a half to get my bag so therefore, I choose to go to the hotel.  I asked for all feathers to be removed from my bed the dude who comes to remove the sheets cannot figure out what sheets and what pillows and what comforters contain feathers so I have to help him.  I have no computer access.  (I left my laptop at home because this was one to be “short” trip.)  I lie down to go to sleep but I’m terribly congested because Atlanta’s fill of allergens.  I end up having to make a midnight run to Wal-Mart to get some decongestants.

The next morning, I missed my 9 a.m. flight because I thought I had a ticket and a boarding pass for that flight but I was only given an interrupted voucher (whatever that is).  I’m not sure if you’ve ever been through security at the Atlanta airport but it’s completely retarded.  It is overly crowded.  If you get there at 7:30, it may take you an hour to an hour and 15 minutes to get through security.  So I get booked on a later flight.  Once I reach Asheville, I head to the counter because I think my bags have reached Asheville before I have.  WRONG!  To make a long story, short, the lady at the counter flat out lied to me.  She told me that my bags were still in Atlanta.  She gives me a claim number and a way to track my bags online.  I get home and I find out that my bags are not in Atlanta but instead left Atlanta and 4:30 in the morning and are now sitting in Montréal, Canada.  Now either she knew this and lied to me or she was incompetent and couldn’t use a computer system.  24 hours later my bag arrives.  My nightmare, which started with one of the most bizarre place to end a game that I’ve ever seen, comes to an end. 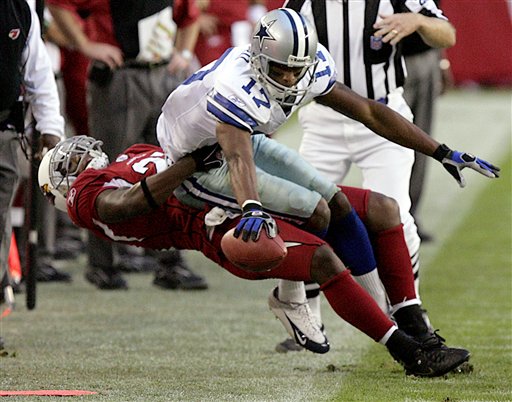 The Cowboys are a conundrum this year.  They clearly have the talent to be one of the elite teams in the league.  Unfortunately, they don’t seem to have the ability to string together two or three wins in a row.  The Cardinals, were one of these teams at the Cowboys should beat.  The highlight of the game was clearly Tony Romo’s performance.  I am not sure that he has made a mistake since he started playing approximate 14 quarters ago.  The low point of the game was what appears to be a season ending Achilles injury to Greg Ellis.

If the Cowboys are able to pull off a victory next week, against the all world Indianapolis Colts then, only then, will I began to jump on the playoff bandwagon.