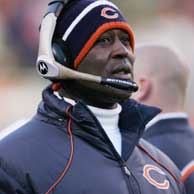 One day, in the future, race won’t matter. Unfortunately, that day is not here today. Race still does matter. Why? The evidence is all around us that race continues to matter. Not too long ago, when Desperate Housewives was new and hot, Terrell Owens does a commercial before Monday Night Football. You remember the commercial. One of the stars of the sitcom (Nicolette Sheridan) asked Owens if he could be late for the game. Then with her back to the camera she drops her towel. (See video below) Immediately. Bam!! Immediately, there was an uproar. ABC who produced the skit for Monday Night Football had to apologize. Terrell Owens, who like many football players is looking for endorsements, had to apologize to try to keep his marginal marketability.

Question — if the same commercial was done with the White athlete would there have been an uproar? Yes, the promo was racy. But it was not obscene. Personally, I do not know the answer to this but I suspect the answer is no that would not have been an uproar. As I tried to consider which White athletes would have been in the commercial, Steve Young, Troy Aikman, Drew Brees, Peyton Manning, all of these athletes guard their image very carefully. They would have refused the commercial. But that’s not the point.

When I grew up in the 60s, it was common knowledge that Blacks were not allowed to be quarterbacks. The quarterback is supposed to be the smartest man on the field. Therefore, it stands to reason that Blacks could play the other positions because they did not require so much brainpower. The exact same rule held true with coaching. By the end of the 60s, it was “okay” for the NFL owner to hire a Black position coach but not a head coach or a coordinator.

The more things change… as we sit back and watch two of the NFL’s premier coaches — Lovie Smith and Tony Dungy. We should ponder, just for a moment, how many minorities are there in the front office? The front office is the face of the NFL franchise. There are no Black owners or general managers or vice presidents of operations. At Valley Ranch, home of my beloved Dallas Cowboys, there is not one Black face in the front office.

Black coaches and black quarterbacks are fairly new thing. In the 1970s, the black quarterback was an experiment. (Marlin Briscoe was the first starting Black quarteback of the modern era. He started for the expansion Denver Broncos in 1968.) There was Joe Gilliam in Pittsburgh. There was also James Harris (I think that was his name) who played for the LA Rams. Then there was Doug Williams. Doug Williams, a Grambling graduate, initially played for the Tampa Bay Buccaneers. He was by far the most successful quarterback at Tampa Bay ever had to that point. He led them to three playoff appearances in four years. A contract dispute led Doug Williams to go to the USFL. After that league collapsed, in 1986, Doug Williams found himself as a backup quarterback Jay Schroeder. After Jay gets injured, Doug Williams leads the Redskins into the playoffs and to the Super Bowl. Doug Williams has a legendary performance. He throws four touchdown passes. He has no interceptions. He completely outshines the future Hall of Famer John Elway. Doug Williams wins the Super Bowl MVP.

Now, after that performance, it became “okay” to hire a Black quarterback. To figure out how we got Black coaches on 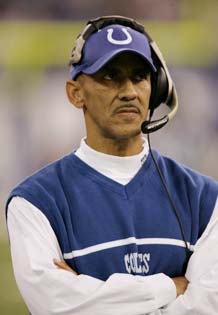 the sidelines, it takes a little history lesson. This lesson comes from my good friend, Edward Cornwell, trauma surgeon and sports nut:

On the occasion of Tony Dungy and Lovie Smith advancing their teams to the Super Bowl I thought you might enjoy a little reminiscence as to the foundation. It also gives me a chance to brag on my brother, (David Cornwell) and our friend Michael Wilbon because they’re too modest to point it out themselves.

Not long after the Redskins won the Jan ’88 Super Bowl David–who was hired in Sept ’87 as the NFL’s Assistant General Counsel and Director of Equal Employment in the wake of Al Campanis’ infamous remarks on Nightline— had a fairly animated discussion w/ the Commissioner over what David saw as an insidious practice:

By then, the league’s players were over 70% Black and it was not uncommon for teams to have Black coaches for receivers, backs, and DB’s. Since head coaches came mostly either from the offensive or defensive coordinator position, the consequence of the owner’s agreement was that there would be Black assistant coaches at the “Black” positions—but precious few coordinators who would then be in a favorable position to interview for a head job.

There is a whole generation of ex-players from the 60’s and 70’s who spent decades as position coaches and got stuck there without rising up to a coordinator position. Their time has probably come and gone. In addition to Emmitt Thomas, I think of coaches such as Charley Taylor, Sherm Lewis , Elijah Pitts, Johnny Roland, Jimmy Raye, and Mean Joe Greene.

I can remember David explaining the situation to me–I had no clue despite following the sport closely–and Mike taking up the mantle with several columns throughout the late 80’s. The league changed the practice so that an assistant could interview for any promotion, and this subsequently gave way to the Rooney rule mandating an interview,

Now that Dungy, Smith, Herm Edwards, Ray Rhodes, Marvin Lewis, Romeo Crennel and Mike Tomlin have risen from the coordinator positions—perhaps the day is not far off when we will view Black head coaches in the NFL the way we do those in the NBA, or Black quarterbacks— hired and fired regularly–and we barely notice.