Home » Bears are in!
Previous Next 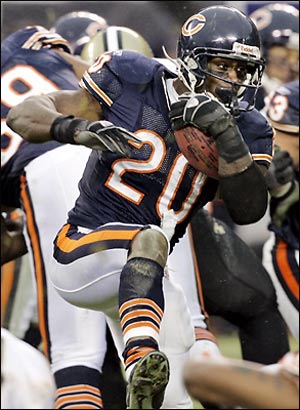 In spite of this the Saints had the Bears on the ropes.  The Saints had just scored the Bears did nothing with the ball.  The Saints missed a 49 yard field goal and the momentum that they had built up over the last 10 – 15 minutes was slipping away.  The Bears punted and pinned the Saints inside their own 5.  This is the game.  If the Saints can mount a  long drive and score anything (field goal or touchdown).  They have the momentum again.  This is the game.  Brees drops into his end zone to pass.  There was no blocking.  3 Bears are going to sack Brees.  He throws the ball in the right flat. There was no one over there. Safety. Game Over.

The Bears took momentum and the snowball began to roll.  New Orleans couldn’t or didn’t run the ball.  More pressure on Drew Brees.  More dropped passes.  More missed receivers.  More turnovers.  As Jimmy Johnson said about the great Eagles defenses over the early and mid-90’s a feeding frenzy starts once those turnovers begin.  New Orleans was never in the game after the safety.

We’ve heard it before, defense wins championships. Today, in the frozen tundra of Chicago, defense (with a capital D.) won Chicago their first NFC championship since 1986.

With these caveats in mind, Peyton Manning and Tom Brady are putting on their helmets and getting ready to do battle. I’m hoping for another great game.