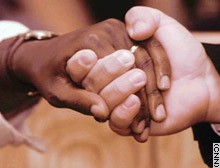 Now, this poll get the “No Duh Award.”  By even measure that I can think of racism still exists. Now, I’m not going to trash this study BUT one of the questions asks if you have been discrimminated against, only 51% of Blacks who answered the study said yes.  I would like to know who are the other 49%.  Where do they live because I want to move there?

Most Americans, white and black, see racism as a lingering problem in the United States, and many say they know people who are racist, according to a new poll.

But few Americans of either race — about one out of eight — consider themselves racist.

And experts say racism has evolved from the days of Jim Crow to the point that people may not even recognize it in themselves.

A poll conducted last week by Opinion Research Corp. for CNN indicates that whites and blacks disagree on how serious a problem racial bias is in the United States.

Asked if they know someone they consider racist, 43 percent of whites and 48 percent of blacks said yes.

But just 13 percent of whites and 12 percent of blacks consider themselves racially biased.

The poll was based on phone interviews conducted December 5 through Thursday with 1,207 Americans, including 328 blacks and 703 non-Hispanic whites.

University of Connecticut professor Jack Dovidio, who has researched racism for more than 30 years, estimates up to 80 percent of white Americans have racist feelings they may not even recognize.

“We’ve reached a point that racism is like a virus that has mutated into a new form that we don’t recognize,” Dovidio said.

He added that 21st-century racism is different from that of the past.

“Contemporary racism is not conscious, and it is not accompanied by dislike, so it gets expressed in indirect, subtle ways,” he said.

That “stealth” discrimination reveals itself in many different situations.

“Racism here is quite subtle,” e-mailed CNN.com reader Blair William, originally from Trinidad, who now lives in Lexington, South Carolina. “I think that the issue is twofold. I believe that white America’s perception of blacks is still generally negative based on their limited interaction with blacks, whether this is via the media or in person. …

“On the other hand, black Americans need to stop devaluing themselves and their people,” he added. “Another race can only respect you if you respect yourself and currently, I find that blacks still devalue and disgrace each other and themselves.”

Racism also can be a factor in getting a job.

Candidates named Emily O’Brien or Neil McCarthy were much more likely to get calls back from potential employers than applicants named Tamika Williams and Jamal Jackson, even though they had the same credentials, according to a study by the University of Chicago.

Racial bias may even determine whether you can flag a cab.

“If a cab passes you by, obviously it is frustrating, it’s degrading and it’s just really confusing, because this is akin to being in the South and being refused service at a lunch counter, which is what happened in the ’60s and ’70s,” he said.

The Opinion Research poll shows that blacks and whites disagree on how each race feels about the other.

Asked how many whites dislike blacks, 40 percent of black respondents said “all” or “many.” Twenty-six percent of whites chose one of those replies.

On the question of how many blacks dislike whites, 33 percent of blacks said “all” or “many,” while 38 percent of whites agreed — not a significant difference statistically because of the poll’s 5 percent margin of error.

“I am a firm believer that racism is rampant in the United States,” wrote another CNN.com reader, Mark Boyle, of Muncie, Indiana.

“The concept of ‘race’ is flawed,” he added. “Our differences as human beings are what make this world exciting and interesting. If we were all of the same culture, how boring would that be? The world needs to take a page from the atmosphere in Hawaii — the most racially diverse place in which I have lived.”