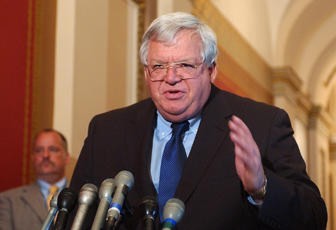 House Speaker Dennis Hastert (R-Ill.) will not seek reelection to the Republican leadership when his members return as a minority party after taking heavy losses in Tuesday’s elections, a Republican official tells TIME. Hastert, 64, a low-key former high school wrestling coach, was beloved by members as a “good cop,” compared to the enforcer style of the longtime number two leader, former Rep. Tom Delay (R-Tex.). But Hastert was badly damaged by questions about how much he had known about former Rep. Mark Foley (R-Fla.) and his contact with pages, and members felt Hastert also handled the aftermath of the revelations clumsily.  more

So, is this the dismantling of Delay’s machine?  The machine that delivered vote after vote for Bush?