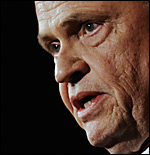 The sarcasm is dripping from the title of this post.  Fred Thompson who is “famous” for putting the Nixon White House’s feet to the fire during Watergate was actually a spy for the White House.  Nixon viewed him as not too bright.  It is really neat when you get a listening device and play it for a Republican.

Thompson is trying to kindle his good-ole boy image (wasn’t that the image that Bush had?  Why would anyone want to walk in Bush’s shoes?).  Unfortunately, the fact that Fred Thompson was a high priced Lobbyist seems to be dulling that image somewhat.  A high priced lobbyist for the pro-choice group National Family Planning and Reproductive Health Association.  Man, I find it hard to believe that this will play well with the Conservative base.

Update:  It appears that Fred Thompson now has no memory of being a paid lobbyist for a family planning organization.  Sounds like the Watergate cop out – “Not to the best of my recollection.”