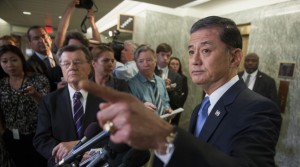 The crazy, stupid predictability of our politics and its ineffectiveness is truly frustrating. Can someone please explain to me how firing Eric Shinseki is going to fix the problem at the VA? General Shinseki has been described by many as an excellent leader. So, we’re firing him because people, without his knowledge, have been falsifying documents in multiple VAs, including the Phoenix VA. It would seem to me that someone with his leadership qualities would be the exact person you would want to fix this mess. Now, let’s be honest. There’s a reason that we have a Veterans Affairs Administration. Congress could have decided many years ago that hospitals throughout the country would be paid to take care of our veterans. That’s not what Congress decided. We, as a people, decided to isolate the veterans in their own separate system. For decades, funding for the VA has gone up and it’s gone down. The inclusion criteria for veterans have been loose and then they’ve been stringent. If we truly want to take care of veterans, then we need a firm commitment to do exactly that and commitment must come from Congress. Congressman must visit their VA on a regular basis and make their own assessment. They must hold the VA accountable. Congressman with their constituents, need to go to the VA. And not for a photo opportunity. Instead, Congress needs to truly commit themselves to making sure that the VA has the resources it needs to take care of veterans. (As I see it, we need more doctors, nurses, nurse’s aides, nurse practitioners, physician assistants, respiratory therapist, occupational therapists, physical therapists and other healthcare professionals. The powers that be need to come up with a comprehensive plan which includes hiring hundreds if not thousands of healthcare professionals. There is no reservoir of healthcare professional sitting around waiting for work. Therefore, the VA is going to have to hire these healthcare professionals away from their current jobs.)

Steve Ballmer, former CEO of Microsoft, has decided to shell out $2,000,000,000 for the Los Angeles Clippers. The irony of this is pretty amazing. So, to punish Donald Sterling the national basketball Association has decided that he can no longer own the team. Donald Sterling bought the Los Angeles Clippers back in 1981 for $12.5 million. Now he gets $2 billion? As punishment? That is simply crazy.

Speaking of billions of dollars, the Los Angeles Clippers, in my mind are not worth two billion dollars. On the other hand, Apple is shelling out $3,000,000,000 to buy Dr. Dre’s Beats Electronics company. Although this buyout does not make Dr. Dre a billionaire, it does place them in the $800,000,000 club.

The VA has gotten some significant funding increases over the last several years. 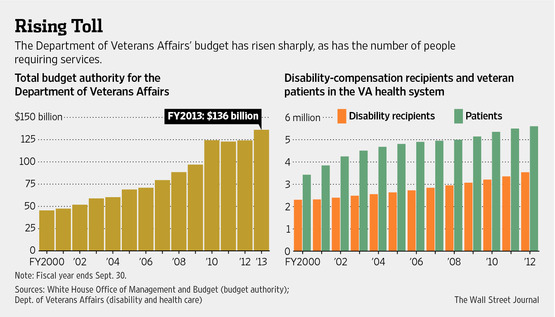 Please notice the corresponding increase in patient load. Many of the disabled patients require increases in resources.