As medicine gets more and more complex we will need some discussion to help guide physicians and inform the public about thoughtful ways to inlude or exclude medical advances.

My good friend, Blake Butler, announced that he is leaving 880 The Revolution at the end of this year. Blake has been behind the mic for four years. He has been a great progressive voice for Asheville. He will be missed. 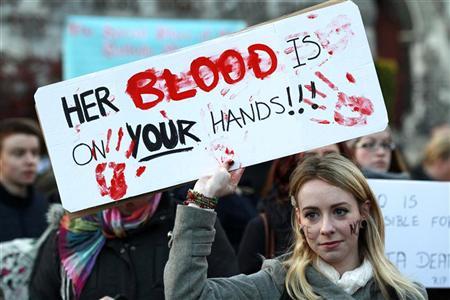 Over the last several days, there have been many blog posts and news articles (here, here, here and here) regarding the death of a woman in Ireland. Savita Halappanavar was a 31-year-old dentist who presented to the hospital with abdominal pain. The patient was pregnant. Reportedly, the doctor said that her baby would not live. Now, exactly what happened next is unclear. All that I know is that for some reason the baby was not removed from the uterus. Dr. Savita Halappanavar got sicker and sicker. The exact reason for this is also unclear. Unfortunately, the baby died and shortly thereafter the mother died from sepsis. Some have pointed to the restrictive abortion laws in Ireland as the reason for the mother’s death. In the year 2012, there is no reason to sit around and wait for the inevitable. If the fetus was dead or dying, it is imperative for the physician to save the mother’s life. Now, before I slam the physicians for being a totally unethical, spineless subhumans, I must say we do not have all the facts. I simply hope and pray that this woman was not allowed to die because doctors were afraid to do the right thing. (As a Christian, I feel very comfortable in saying that the right thing to do when there is nothing that you can do for the fetus is to save the mother.)

Continuing on my medical theme, the New York Times had an editorial titled, “Care at the End of Life.” I think the editorial was good. I think it is something that everyone should read. Unfortunately, as a country, we Americans don’t like to talk about death. We hate it. We avoid the subject. It is almost as if by ignoring death we can somehow put off the inevitable. It was not so long ago when we were all familiar with death. 70 or 80 years ago, people didn’t go to hospitals; physicians came to your house. Often, there was nothing the physician could do. The family member would die at home. Now, many of us are shielded from death. Family members die in hospitals. In my opinion, it is actually important that we in the medical profession figure out what it is that patients truly want at the end of life. The only way for us to truly know is for us to open up a dialogue with our patients. As a trauma surgeon, by the time I’m discussing end-of-life issues, things have gone terribly wrong. The patient has been in a terrible car crash and there is nothing more that we can do. In general, it is up to primary care physicians to sit down and chat with their patients. This simple task mistakenly sounds easy, but it is not. Some patients will become offended when approached about end-of-life issues. Some of them believe that their physician has “given up” on them. Some patients will simply go to another physician because they are so upset. We, as a country, have to fix this. Doctors need to become more skilled at discussing end-of-life issues. Patients need to understand that they are in charge of their own medical care. Therefore, the only way that they were in charge is to have this discussion. END_OF_DOCUMENT_TOKEN_TO_BE_REPLACED

Just over two weeks ago I took my first trip down to Galveston since Hurricane Ike. Ike hit in mid-September.

Above and below are pictures I took in Galveston. One is of a boat still out of the water. The other is of a very damaged pier. You can explore the online edition of the Galveston County Daily News to get some sense of life on the island today.

The upshot of what I saw in Galveston is that the outward damage to buildings could have been much worse, but that many homes and business places were flooded with sea water and need much work before they can be used again.

The fact that gets lost is that Galveston was an economic disaster zone before the hurricane. The poverty rate on the island has always been high. In 2007, 20.6% of people living in Galveston lived in poverty. This is even higher than the appalling 16.3% rate for all Texas.

With massive layoffs at the University of Texas Medical Branch in recent days, Galveston has become even more of a disaster zone. UTMB is the largest employer in Galveston. 8,000 of its 12,000 employees live in Galveston. 3,000 people are being let go with this round of layoffs. Galveston had a pre-hurricane population of just over 50,000.

It’s a trick when we are told the hurricane was a unique disaster for Galveston. The trick is that disaster conditions that merit a special response come only every so often, and the rest of time it is business as usual.

Of course in Texas, we do things a bit differently. The prevailing ethos under both Democratic and Republican political control in Texas has often been to kick a guy when he is down. The layoffs at UTMB, under the pretense of losses sustained since the hurricane, is a fine example of this creed. The fact of an actually acknowledged disaster was just the right time for the huge job cuts.

Oh, for the malignant neglect of better days!

The downsizing of UTMB began before the storm. The number of beds and services for the uninsured were already being cut.  You can take what the University of Texas Board of Regents says about the cuts being a result of the hurricane as false. They want to chop down the size of UTMB and leave Galveston, of all things, high and dry, when it comes to places to work on the island.

Galveston is one of the founding communities of Texas. It’s history runs many years before that of most of the rest of Texas. I’m not going to pretend I have the solution to Galveston’s problems. A good starting point might be to see Galveston as worth saving. And to realize that even with the Sea Wall, Galveston has long been underwater in many regards.

The right-wing talking heads have been whispering to American Jews that they can’t trust Senator Barack Obama. “Barack Obama doesn’t really support Israel,” they say. They have taken Obama’s statement on speaking with our enemies to mean that Obama would speak with Hamas, although he has never said that. Well, today Obama was in Boca Raton, Florida where tried to put all of these fears to rest. Obama promised an “unshakable commitment” to Israel. He was also hoping that his presidency can repair some of the damage in African-American and Jewish-American relationship. These problems date back to Jesse Jackson’s ill thought out statements over 25 years ago.

Finally, although it has been rumored for months, tomorrow is the day that Senator John McCain is suppose to release his medical records. Back in 2000, McCain was diagnosed with Malignant Melanoma of the face and arm. Were these two separate lesions? Was one lesion a primary and the other a secondary or metastatic lesion? The implications are significant. In 1993, McCain had a melanoma removed from his shoulder.

Now, I’m not a cancer surgeon, but I am a surgeon. In 2000, McCain had a return or recurrence of his cancer. If I’m not mistaken, metastatic melanoma can not be cured only treated. In my book, this would make him an extreme risk as a president.