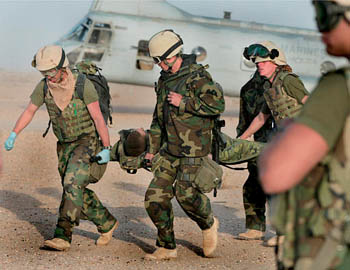 Bob Woodruff interviewed Jim Nicholson (here and here) and it sure seemed that he said yes when the answer should have been no.

A proposal to keep seriously wounded vets from falling through the cracks of the bureaucracy was shelved in 2005 when Jim Nicholson took over as the secretary of the Veterans Affairs Department, according to the former VA employee who was responsible for tracking war casualties.

As a result, seriously wounded veterans continued to face long delays for health care and benefit payments after being discharged from the military, says former VA project manager Paul Sullivan.

The program, called the Contingency Tracking System, had been approved by Nicholson’s predecessor but died once Nicholson took over the VA, Sullivan told ABC News.

Sullivan said he was told the cost of the system — less than $1 million to build and requiring a handful of staff to maintain — was prohibitive.

When asked about the Contingency Tracking System at the White House Wednesday, Nicholson told ABC News, “I’m not sure I know what program you’re referring to.” He added that “when the VA gets patients…we instantly create an electronic medical record for them.”

In testimony before Congress today, a VA official confirmed that its current tracking system still depends on paper files and lacks the ability to download Department of Defense records into its computers, a key flaw originally identified as leading to veterans getting lost between the cracks.

Throughout 2004, the new program sat on a shelf while returning veterans struggling with serious brain injuries, psychological trauma, paralysis or worse spent weeks and months fighting the VA bureaucracy to receive the benefits they deserved after being discharged from the armed services, veterans advocates say.

“In that gap…people find themselves not being able to pay for their car, their mortgage, they may have marital problems because they can’t pay their bills,” said Steve Robinson, director of veterans’ affairs for the advocacy group Veterans for America. “You find suicide, alcohol abuse, drug abuse, domestic violence.”

Yesterday, President Bush put VA Secretary Nicholson in charge of an interagency task force to determine what can be done to deliver benefits and health care now to thousands of wounded vets who have struggled to receive care.

The announcement came almost exactly two years after Nicholson had received the newly designed system, itself the result of an internal VA task force studying how to make sure wounded soldiers were “seamlessly” transitioned from military service to veteran status with the care and benefits they’d earned.

Despite Nicholson’s apparently cool reception to the inexpensive solution, others thought the system had merit. “It was a great idea,” said Cynthia A. Bascetta, a congressional expert on veterans’ health care who was briefed on the project just prior to its completion. After the briefing, she said, she didn’t hear any more about it.

Newspaper exposes in 2004 prompted former VA Secretary Principi to come up with a plan to fix the problem of wounded vets returning from Iraq and Afghanistan and not receiving timely care and benefits.

“You read a story about someone who was caught in between and I said, ‘Wait a minute. We have to do better than that,'” Principi, now a lobbyist for the Pfizer pharmaceutical company, told ABC News.

Sullivan and his team designed the “Contingency Tracking System” (CTS), a secure online database that would capture Department of Defense data on soldiers wounded on the battlefield and track their status through their medical care and treatment at both Defense and VA facilities.

To keep costs down, he said, he cadged computer hardware from other offices which weren’t using theirs.

CTS would record each vet’s diagnosis and help VA staff make sure he or she received all of the dozens of benefits they might qualify for as soon as possible, from rehabilitative care to disability payments, vocational training and more.

“Before the CTS, VA had no nationwide system for tracking casualties from the battlefield,” Sullivan said.  Instead, the department relied on a haphazard system of casualty records manually kept on spreadsheets at several locations, which sometimes did not match up with Defense Department casualty records.  That process hampered vets’ timely access to medical care and other benefits after discharge, Sullivan said.

Sullivan left the VA in March 2006; he is now an advocate for improving care for veterans. He reacted with dismay at yesterday’s announcement that Nicholson would be leading the new effort to make sure wounded veterans get the care and benefits they deserve.

“I don’t think it’s a good idea for the people responsible for the problem to be in charge of fixing it,” he told ABC News.

In a written response to ABC News, the VA said a new tracking system “very near deployment” would allow them to track casualties soon after they left the battlefield, much the way CTS was designed to do in 2004.