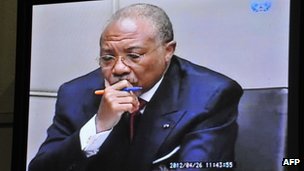 For the people of Liberia, I’m positive this took too long. Finally, Charles Taylor has been convicted of aiding and abetting war crimes.

Taylor, 64, has been on trial for almost five years.

“This is an incredibly significant decision,” Elise Keppler from the campaign group Human Rights Watch told the BBC.

“Charles Taylor has been called to account for the crimes in Sierra Leone. It is an incredible day for international justice but most of all for victims in Sierra Leone and everywhere,” she added.

Taylor was accused of backing rebels who killed tens of thousands of people in Sierra Leone’s 1991-2002 civil war. He was convicted on 11 counts including terror, murder and rape – but cleared of ordering the crimes.

David Crane was the first prosecutor for the Special court for Sierra Leone. In 2003 he signed the indictment against Charles Taylor. He told the BBC’s Newshour programme that it was irrelevant that he was not convicted on all charges.

“When I drafted that indictment and signed it there were three [charges] and you only had to [find him guilty on] one, so therefore at the end of the day it’s what they did with the charges that matters, and they found him guilty as charged… of the horror story in Sierra Leone,” he said.