I’m not sure what’s going on in Egypt, but there are big protests and rallies once again. It appears that the Egyptian population has grown tired of the Muslim brotherhood and President Mohammed Morsi. The military appears to be stepping in and demanding that the government meet the needs of the people. This is going to be interesting. I wonder how conservatives will spin this as somehow being Obama’s fault.

It appears that Edward Snowden is still in Russia. It also appears that he has applied for asylum in Russia. You cannot tell me that this guy is not somewhere between a rock and a hard place. I’m guessing that Edward Snowden had the original plan. It appears that plan has fallen apart. It appeared that at first he was worried about the NSA spying on Americans. Okay. That is probably a legitimate concern. Then, he decided to talk with China about the NSA spying on China, the European Union, and other countries. This I don’t understand. The fact that we spy on other countries isn’t a revelation. As a matter fact, the fact that other countries spy on us isn’t a revelation either. This is what national intelligence agencies do. At best Edward Snowden is misguided. At worst, he appears to be someone who thinks he is smarter than he really is. He is really in deep kimchi.

Yesterday, 19 firefighters were killed in Arizona. These firefighters were fighting a forest fire which suddenly changed course. This represents the largest loss of life in a single day in over 50 years. My prayers go out to the family and friends. 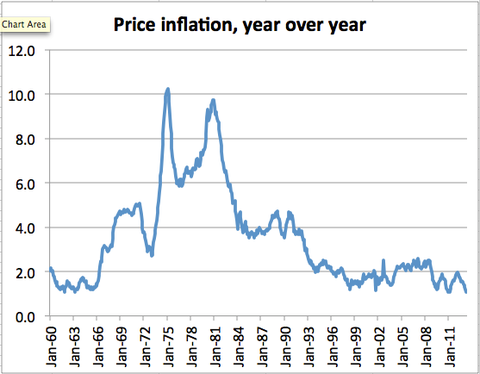 There is no hint of inflation. Remember, several years ago when conservatives were all up in arms over the multiple stimulation packages that injected money into the economy in order to try to save the economy? Conservatives yelled that we were going to have runaway inflation. Not only have we not seen anything that resembles runaway inflation, inflation has been stagnant. On one hand, this can be looked at as a good thing. Consumer prices are really not rising significantly. On the other hand, this is a very bad thing. Wages are also stagnant. With stagnant wages that means our buying power is also stagnant.

In Texas, there is a huge rally in support women’s rights. As you recall, Gov. Rick Perry has called another special session in order to try to curb a women’s right to choose.

This continues to be the most unpredictable Wimbledon in recent memory. Serena Williams, five-time Wimbledon champion, has been bounced out in the fourth round.

More on the fires.

The Station fire, which has destroyed 21 homes and killed two firefighters, was burning within a quarter of a mile of Mt. Wilson as firefighters prepared for another long, hot day.

Inspector Edward Osorio of the Los Angeles County Fire Department estimated property damage from the fire at $7,671,000 and rising.

The fire is expected to move in a northeasterly direction, and officials are putting significant resources on the northern edge of the fire near Acton.

Officials said the goal for today was to keep the fire west of Highway 39 and Angeles Crest Highway; south of Highway 14, Pearblossom Highway and Highway 138; east of Interstate 5 and north of the foothill communities along the Angeles National Forest border.

Mt. Wilson was believed doomed last night, but Osorio said aggressive brush clearance by crews and drops of fire retardant from the air seem to have helped. (more… )

At 9 a.m. Thursday, three men met on the ridge and studied the mountainside above their homes.

The worst looked to be over. White smoke rose in listless little spirals from blackened earth. The air was still. The mourning doves did their usual dirge from the overhead lines. Sprinklers swish-swished.

But Santa Barbara’s endemic twist on the Santa Ana — the “sundowner” wind — is as cagey as it is ferocious.

The winds rush out of the canyons without warning, often around sundown (but not predictably so). They can turn cool days into sweltering nights and, when there’s a fire, drive it straight out of the mountains and to the city’s northern edge.

And then before dawn, they retreat. The fire wanders back into the hills, like some nocturnal predator. Morning breaks peacefully — and the restless waiting begins. (more… )