A large earthquake in Canada caused a tsunami warning in Hawaii. Tsunami warning was just lifted. Thankfully, it was a false alarm.

Once again, I’ve become disillusioned with North Carolina. No, I think “disappointed” is better. It is now clear that the progressive wave that swept the state back in 2008 was overtaken by the tea party in 2009 and 2010. We are still recovering from our tea party hangover. I was hopeful that we may had flipped back into the progressive column, but we haven’t. Latest polling still shows North Carolina leaning towards Romney.

This probably reflects my bias, but I think it is critically important that the Salt Lake Tribune has endorsed Barack Obama for a second term. The language of the endorsement is pretty stark – More troubling, Romney has repeatedly refused to share specifics of his radical plan to simultaneously reduce the debt, get rid of Obamacare (or, as he now says, only part of it), make a voucher program of Medicare, slash taxes and spending, and thereby create millions of new jobs. To claim, as Romney does, that he would offset his tax and spending cuts (except for billions more for the military) by doing away with tax deductions and exemptions is utterly meaningless without identifying which and how many would get the ax.

Nate Silver, from the New York Times, has put out a comprehensive assessment of where everything stands in the polls. It is clear that Barack Obama has halted the momentum that Mitt Romney achieved after the first debate. Ohio continues to be the pivotal state. All signs continue to point to President Barack Obama winning four more years. 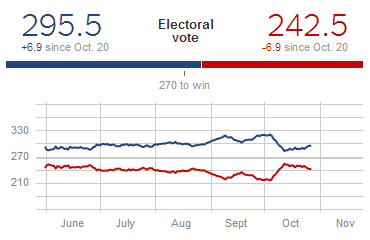 Please don’t assume that anything that I’ve written today or in the past suggests that this race is over. It is not. This race is very close. A major gaffe, a major event, something unforeseen can still swing this election for Obama or for Romney. There is still plenty of work to be done on both sides.