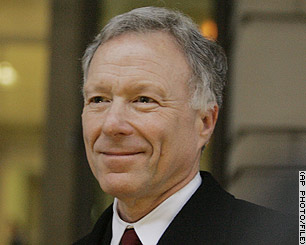 I thought that the evidence was a slam dunk (pun intended). It will be interesting to see what the jury was talking about for 10 days. Now, before everybody gets all happy. Yes, Libby is guilty. He could a maximum of 25 years in jail and $1 million fine but we live in America. The rich have plenty of ways to stay out of jail. There will be appeals. There is always a possibility that Bush will pardon Libby. Bush clearly isn’t worried about his popularity (polling at 29%). So, my response to the Libby verdict is guarded. Happy but Guarded.

Former White House aide I. Lewis “Scooter” Libby has been found guilty on four of five counts in his perjury and obstruction of justice trial.Libby, 56, faces a maximum sentence of 25 years in prison and a fine of $1 million.

The five-count indictment against the former aide to Vice President Dick Cheney alleges perjury, obstruction of justice and making false statements to the FBI and a grand jury investigating how Valerie Plame was outed as a CIA operative.

Libby is not accused of exposing Plame. He resigned in 2005 after the grand jury indicted him.

Prosecutors contended Libby disclosed Plame’s covert profession to reporters as part of a plan to discredit her husband, Joseph Wilson, a former ambassador who alleged that the Bush administration twisted some intelligence in the run-up to the Iraq war.

Wilson, who conducted a CIA-sponsored trip to Niger, wrote in a July 2003 New York Times editorial that he found no evidence Iraq sought to buy uranium from the African nation, as the administration claimed.

The jury was down to 11 members — seven women and four men. A week ago, one of the jurors revealed that she had obtained outside information that prompted the judge to disqualify her.

The defense said it would accept 11 jurors to avoid having to start deliberations over with an alternate. The prosecution objected, but U.S. District Judge Reggie B. Walton overruled, and the panel has continued with one chair empty.

Testimony and evidence in the trial began January 23.