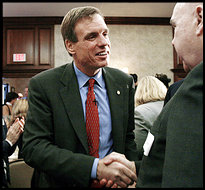 I seriously thought that he would make a great candidate.  Oh, bother. From National Journal:

Former Virginia Gov. Mark Warner dropped the first bombshell of the ’08 race with his Oct. 12 announcement to forego a White House bid. “…[W]hile politically this appears to be the right time for me to take the plunge—at this point, I want to have a real life,” he said in a statement announcing his decision.

What does Warner’s exit from the Dem stage mean for the other non-Hillary Clinton hopefuls? Look for one of the biggest immediate beneficiaries to be Illinois Sen. Barack Obama, who folks may start to take much more seriously. What’s not clear is when John McCain, John Edwards and Clinton officially declare their intentions. They all have the standing to wait a bit longer than others, but at the same time, they’d like to make sure their challengers don’t get too much oxygen. This should be fascinating to watch.