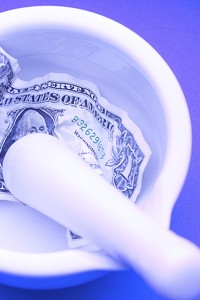 It’s time that everybody realizes that there is a reason that we don’t have universal health care already. There are powerful forces that like healthcare just the way it is. Everybody has been talking about insurance and how they’ve been taking a large bite out of our healthcare dollar but it’s more than just insurance companies.

Americans spend $2.2 trillion on health care. That is a huge chunk of money. Pharmaceutical companies and product makers have to carve out their part. On the good side, there are many drugs which did not exist for decades ago which make our lives better. Clot busting drugs can reverse the effects of a heart attack if given early enough. Patients with early signs and symptoms of a stroke can be given these drugs and 24 hours later they can walk out of the hospital like nothing happened. On the bad side, these drugs are ridiculously expensive. In 2007 Americans spent over $227 billion in prescription drugs.  Drug companies saw their profits increase by $8 billion in the first half of last year!

If we look back to the 1960s when President Lyndon Johnson was proposing Medicare who opposed this revolutionary program, at that time? Physicians. Physicians were afraid that their reimbursement would be cut in order to save money. The American Medical Association (AMA) led the charge against Pres. Lyndon Johnson’s revolutionary idea. It was only after an agreement between the White House and the AMA was made to the bill moves through Congress. Lawmakers would not make any effort to curtail physician charges. For approximately 10 years, Congress and the White House kept their promise. Starting at approximately 1980, a huge effort was made to control the healthcare costs by cutting physician reimbursement. Many physicians and the American Medical Association currently oppose healthcare reform. They fear, and rightly so, that budget shortfalls will be corrected by cutting physician’s reimbursement once again. Over the last 20 years, many physician salaries have been cut in half secondary to these reimbursement cuts. Cardiothoracic surgeons, radiologists and anesthesiologists have been hit particularly hard.

I’m not saying that most physicians, if not the vast majority of physicians are not excellent advocates for their patients. It is my opinion that physicians make the best advocates for patients. We are, as a group, very empathetic. We love to take care of patients.  At 3 in the morning, who is sitting at the bedside?  The nurse and the doctor are at the bedside!  Yet, we are forced in this debate to choose between our patients and our paycheck.  I think that the AMA is making the wrong choice.  Currently, there seems to be an alliance forming between the AMA and the pharmaceutical companies. They may be working to block universal health care.

It is my opinion that we cannot go forward with universal health care reform until we can figure out a way to get the majority of physicians on board. Again, the White House will probably need to make a deal with physicians in order to get some sort of public option through Congress.

There are other players in the healthcare game they’re making serious money but aren’t as high profile as physicians. There are nursing homes and hospitals along with product manufacturers (scooters, walkers, titanium orthopedic rods and many others). Combined, Americans spent close to $850 billion paying for these healthcare services in 2007.

We can’t pretend that this is going to be easy. We can’t pretend that some people, if not most people, aren’t going to loose some skin in this game. We, Americans, cannot continue to spend 16% of our gross domestic product on health care. We need to spend money on education, infrastructure and other important needs. I’m not saying that Healthcare isn’t important. I’m saying that we have a finite amount of money. We need to spend it wisely to get the most bang for our buck.