Keith, thanks for letting America see the world that I work in everyday

Home » Keith, thanks for letting America see the world that I work in everyday
Previous Next

Keith, thanks for letting America see the world that I work in everyday

I am a trauma surgeon, a doctor like DemFromCT, (Oops, thanks to DemFromCT and McJoan for pointing out the error) and many others. It’s kind of funny being a trauma surgeon, since everybody “thinks they know what you do,” but they really don’t. I tell somebody I’m a trauma surgeon and they ask, “Do you work in the emergency room?” I smile and say, “Sort of.” As a trauma surgeon, I take care of anybody and everybody who walks in the door who has had “significant” trauma. This includes everyone from victimes of car crashes and gunshot wounds to people who fall from rooftops or fall off their motorcycles. If Keith Olbermann’s father fell out of bed, had a traumatic injury and came to my hospital, one of my partners or I, myself, would take care of him.

I’ve been arguing for universal healthcare (government payer) for more than six months. I’ve complained to anyone who will listen. I’ve talked about it extensively on my radio show, on my blog and here on the Daily Kos. I have argued with my friends, both liberals and conservatives. I’ve discussed this issue at length with doctors, lawyers, other healthcare providers, politicians and even a guy sitting next to me on the plane. I’ve talked about health care for all. I’ve talked about describing it as “Medicare for All” as Keith did tonight. I’ve talked about individual patients who would benefit from universal healthcare, about the cost savings and about the fact that small business will be freed from this burden and therefore would be better able to compete with other small businesses and also against large businesses. This would be a win-win proposition for them. Universal healthcare would help large corporations compete with international companies based in England, France or almost any other Western country.

Many conservatives talk about freedom of choice and how important freedom is. I have argued that freedom from worry is, by far, more important. Universal healthcare would allow you to choose your own doctor and your own hospital. You would not have to worry about choosing between some sort of health savings account or something with a high deductible versus something with a low deductible and no maternity coverage because, in essence, that decision is not fair. You, as an American, don’t know the statistics about how likely it is for you to develop diabetes or hypertension. What is your risk for needing long-term rehabilitation care? How much will that cost? You don’t have enough information to make the decision and shouldn’t have to make these decisions. 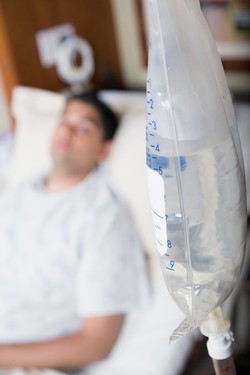 As I mentioned above, I see all types of patients. I’ve been amazed at how some upper-middle-class Americans have tried to roll the dice and go without health insurance. Several months ago, I saw this 40-year-old businessman who was riding his Harley Davidson through the beautiful Blue Ridge Mountains. He lost control of his motorcycle and crashed. He had several rib fractures and a small collapse of his lung. I recommended the chest tube (a tube inserted between the ribs and hooked up to a suction device to reinflate the lung), which is standard practice for this injury. I told him that I thought there was approximately a 20% chance that he would not require it. He told me that because he did not have insurance, he wanted to go home as soon as possible. Then he asked me if I thought it was safe for him to go home with the rib fractures and the collapsed lung and while taking pain medications. No one should have to make these decisions. In the United States of America, the richest nation on earth, this man was trying to decide whether he should go home and risk the sudden collapse of his lung and possible death versus a higher medical bill. Let’s get a good healthcare bill done, now!

Again, I would like to thank Keith Olbermann for using his personal experience as a way to truly bring home this debate.