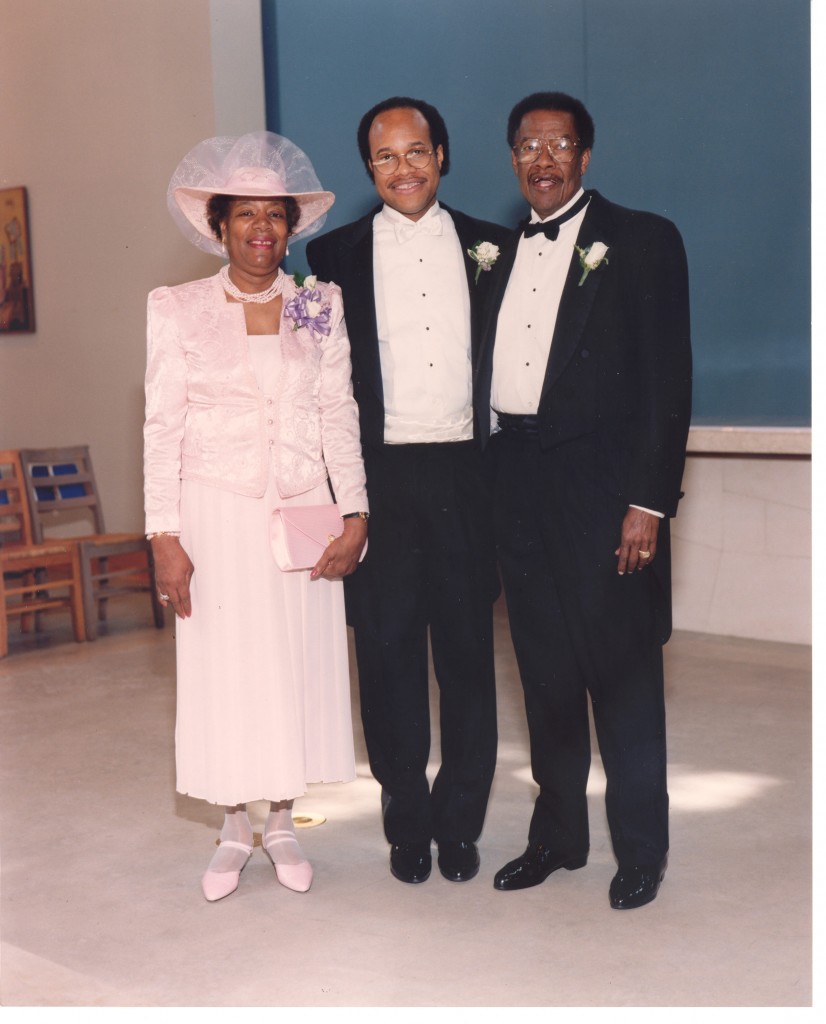 Mom, Dad and me

Not long ago, I was sitting with a friend of mine, surrounded by her husband and two daughters. Her father was in the center of the room, in a hospital bed, on oxygen. He looked ashen… He was dying.

It is times like these when I flash back to my own father’s life and death.

My father was a remarkable man. He was born in Georgetown, Guyana in the late 1920s, the youngest of 13 children. He immigrated to the United States in the mid-1950s, believing he had a track scholarship to Morgan State College.

Somehow, by the time he arrived, there were no more track scholarships. He slept on the floor of a friend’s dorm room and worked in a Tootsie Roll factory by day.

Dad taught himself to play tennis by swinging a used wooden tennis racket, hour after hour, hitting ball after ball against a brick wall—and earned himself a tennis scholarship. That’s how he went to college, and after he graduated he went on to medical school in Kansas City.

As I stand next to my friend’s daughter and we watch her grandfather breathe in … out … in … out, I continue to think back to my own father. He was up by 5 or 5:30 every morning and was showered, dressed (in a perfect-fitting suit), and had downed his two cups of coffee before 6:15—guaranteeing that he would be at the hospital by 7 a.m. He would do hospital rounds, then go open his office by nine, where he would see 30, 40, even 50 patients a day.

My father liked to “work hard, play hard” long before that became a bumper sticker. He wanted to expose my siblings and me to as much of life as possible. We traveled to New York, Los Angeles, Chicago, and even took a vacation to Mexico in 1973.

He was quick to laugh—and also a strict disciplinarian. When he knitted his eyebrows and told you to do something, he wanted it done.

He was also a man of wisdom, who told me on more than one occasion, “It’s okay to be right, but you don’t want to be dead right.” At first, I didn’t understand; with time, as with most of his sayings, it became crystal clear.

In Ferguson, Missouri, Michael Brown stood his ground. He wasn’t going to be hassled. He was going to be right. Perhaps if Michael Brown had had a father who had told him that being alive was more important than being right, he would be alive today.

In many ways Dad was the proverbial riddle, wrapped in an enigma, inside a mystery. Like many people of intelligence and character, he was a paradox. He loved being around people; yet he also needed time to keep to himself, and he loved being surrounded by family.

Holidays were always family time. Dad would cook something in a smoker, usually overnight. Those slow-cooked meats were always spectacular, and the following day aunts, uncles, nieces, and nephews would descend on the house for a feast. We would do it three or four times a year, as predictably as the sun rising in the east. Of course, as I became a teenager, I wanted to be with my friends instead of family, but that was nonnegotiable. Family time was family time. I think what my dad was telling me was that when times get tough, friends can come and friends can go, but family will stay by your side.

My dad also believed in education, personal growth, expansion. He was all about doing more, doing better; he was all about the next thing. A couple of weeks ago, I took my 11-year-old grandson to see the Dallas Cowboys play the Indianapolis Colts at AT&T Stadium. We had great seats, and the Cowboys played what was probably their best game in the past five to eight years. We both had a blast. Yet … throughout the excursion, I could feel my father with us. He was smiling down upon us, but I could hear his advice: This is good, but expose your grandson to more.

My father was not a revolutionary. He was a hard-working man who was dedicated to his family and friends. Hard-working, dedicated, and determined. That last word’s probably the best description of him—determined.

Dad also had a gift for finding the right tone, the right story, the right witticism, to comfort or help or support a friend or family member in need. He was a doctor, and one of his gifts was knowing the right words to help others heal. In that hospital room a while back, after sitting with my friend and her family for a time, I turned to leave. I had a very strange feeling that Dad would have done a better job than I did at comforting them.