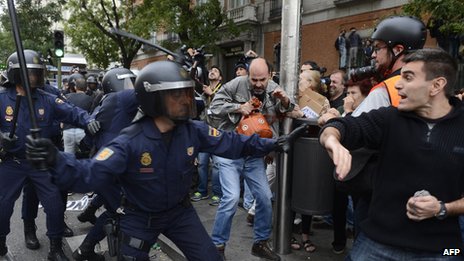 Austerity really isn’t working out all that well in Europe.

We have known for over 75 years that the key to recovering from a recession is to follow a counter-cyclical fiscal policy that will reduce unemployment. We have long exhibited the wisdom to adopt automatic stabilizers that increase government services and decrease taxes when a recession strikes.

What would have happened if Obama had adopted austerity as Berlin imposed austerity on the European periphery? It would have prevented any recovery, throwing the U.S. into an even more severe recession. Berlin’s austerity demands have thrown the Eurozone back into a gratuitous recession, increasing the budget deficit in many nations and plunging Greece and Spain into depressions. Europe has followed Samuelson’s and Ryan’s policy advice and the results have been disastrous. Samuelson’s and Ryan’s austerity policies violate economic theory, economic history, and a natural experiment in Europe with austerity that has proved catastrophic. Samuelson, however, makes bizarre odes to Irish austerity, emphasizing the necessity of “persuading ordinary citizens to tolerate austerity (higher unemployment, lower social benefits, [and] heavier taxes) without resorting to paralyzing street protests or ineffectual parliamentary coalitions.”

New York Atty. Gen. sues Bear Stearns (J.P. Morgan bought the remnants of Bear Stearns). It appears that Bear Stearns was selling toxic complex mortgage-backed securities and they knew it was garbage but sold it as “good as gold.”

Oh, damn, Hannity and Drudge have a scoop. It is a 2007 video of Barack Obama talking about hurricane Katrina.  Of course, Fox News covered this speech back in 2007. Note that Obama called Rev. Wright a friend and great leader. Of course, Obama kicked Wright to the curb later that year when Wright continued to make a fool of himself. There is nothing in this video that we didn’t already know, but it does give Hannity another opportunity to mention Reverend Wright. So, I guess that’s something.

Republican Rep. Allen West is known for hurling his verbal assaults and over-the-top rhetoric. His Democratic opponent Patrick Murphy is not going to roll over and take it. He’s rolled up the sleeves and is fighting back. Allen West has been the tea party darling. Some Americans have drooled over his service record but others have questions. Patrick Murphy has pointed out some of the problems of Allen West’s service to our country. Good for him!

It looks like the United States is planning a counter offensive in Libya. Going directly after the militants.

If you have an opportunity, please pick up the book 500 Days by Kurt Eichenwald. I am almost finished. It is one of the best books that I’ve read with regards to the decisions that were made to combat the September 11 attacks. Outstanding.