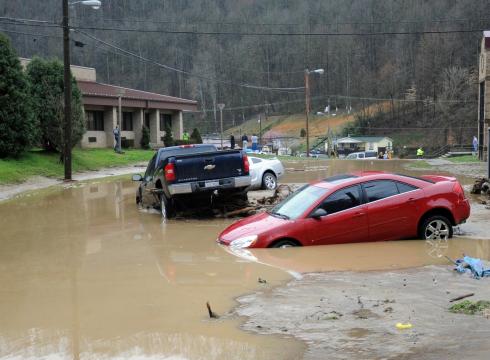 * West Virginia: “Fourteen people were killed in flooding in West Virginia on Thursday and Friday, Gov. Earl Ray Tomblin said in a news conference this afternoon, as rescuers and residents continued to feel the effects of Thursday’s torrential rains.”
* Not a good day for investors: “The Dow Jones Industrial Average dropped more than 600 points on Friday as markets around the world reacted to a vote by citizens of the United Kingdom to leave the European Union.”
* Too late: “[I]t seems many Britons may not even know what they had actually voted for…. Google reported sharp upticks in searches not only related to the ballot measure but also about basic questions concerning the implications of the vote. At about 1 a.m. Eastern time, about eight hours after the polls closed, Google reported that searches for ‘what happens if we leave the EU’ had more than tripled.”
* It almost certainly won’t happen, but I love the online activism: “A petition calling for a second EU referendum has been launched — and is proving so popular the page keeps crashing.”
* A worthy monument: “President Obama on Friday officially designated the Stonewall Inn a national monument, making it the first in the country to honor LGBT equality. Obama made the announcement in a YouTube video, saying ‘our national parks should reflect the full story of our country — the richness and diversity and uniquely American spirit that has always defined us.'”
* On a related note: “Ban on transgender service members expected to end in July, defense officials say.”
* And then there were 79: “The Pentagon delivered a Yemeni captive to Montenegro Wednesday after he spent 14 years at Guantanamo as a suspected Osama bin Laden bodyguard, leaving 79 captives at the U.S. Navy base detention center in Cuba.”
* VW: “Volkswagen has agreed to pay $10.2 billion to settle its U.S. emissions scandal case, according to the Associated Press, citing two anonymous people briefed on the matter, in what would be one of the largest payouts by an automaker in history.”
read more