Changing my mind on Bill Richardson

Home » Changing my mind on Bill Richardson
Previous Next

Changing my mind on Bill Richardson 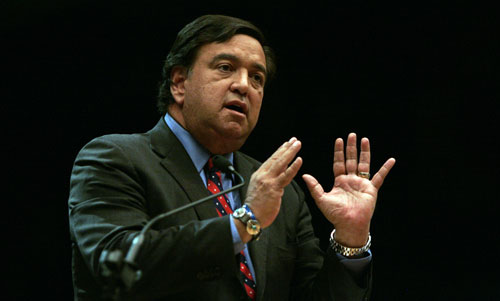 Since December, I have been trying to look beyond Hillary and Obama. I like John Edwards. I really liked Vilsack but he is out of the race. Senators Dodd and Biden are good people with a lot of experience but there was something really different about Bill Richardson. Ambassador Richardson was been, well, an ambassador. He has been a senator. He has been Secretary of Energy. He has been Governor. He seems to talk the talk and walk the walk then, yesterday, something very surprising happened that may have turned me off to Bill Richardson forever. He got an endorsement from conservative columnist, David Brooks of the New York Times. UUUUUuuuuugggggghhhhh. Where’s the Phenergan, I think I’m going to throw up.

So there I was, sitting in my office, quietly contemplating suicide. I was watching a cattle call of Democratic presidential candidates on C-Span. In their five-minute speeches, they were laying it on thick with poll-tested, consultant-driven clichés of the Our Children Are Our Future variety. The thought of having to spend the next two years listening to this drivel set me wondering if it was literally possible to be bored to death.

Then Bill Richardson walked onstage. He was dressed differently — in slacks and a sports jacket. He told jokes that didn’t seem repeated for the 5,000th time. He seemed recognizably human, unlike some of his overpolished peers. He gave the best presentation, by far.

Then a heretical question entered my head: What if Richardson does this well at forums for the next 10 months? Is it possible to imagine him as a leading candidate for the nomination?

When you think that way, it becomes absurdly easy to picture him rising toward the top. He is, after all, the most experienced person running for president. He served in Congress for 14 years. He was the energy secretary (energy’s kind of vital).

He’s a successful two-term governor who was re-elected with 69 percent of the vote in New Mexico, a red state. Moreover, he’s a governor with foreign policy experience. He was U.N. ambassador. He worked in the State Department. He’s made a second career of negotiating on special assignments with dictators like Saddam, Castro and Kim Jong Il. He negotiated a truce in Sudan.

Most of all, he’s not a senator. Since 1961, 40 senators have run for president and their record is 0-40. A senator may win this year, but you’d be foolish to assume it.

When it comes to policy positions, he’s perfectly positioned — not by accident — to carry liberals and independents. As governor, he’s covered the normal Democratic bases: he raised teacher pay, he expanded children’s health insurance, he began programs to stall global warming, he built a light rail line.

But he also cut New Mexico’s top income tax rate from 8.2 percent to 4.9 percent. He handed out tax credits to stimulate economic growth. (He’s the only Democrat completely invulnerable on the tax cut issue.) He supports free trade, with reservations. And he not only balanced the budget — he also ran a surplus.

On cultural issues, Richardson has the distinct advantage of not setting off any culture war vibes. He was in college in the late 1960s, but he was listening to the Beach Boys, not Janis Joplin. He was playing baseball in the Cape Cod League, not going to Woodstock. He idolized Humphrey, not McCarthy.

Richardson is actually something of a throwback pol — a Daley or La Guardia who doesn’t treat politics as a moral crusade. That might appeal this year.

On the nuts and bolts of the campaign, he has some advantages as well. He won’t have the $150 million war chests that Clinton and Obama will have. On the other hand, he won’t have the gigantic apparatuses that fund-raising on that scale requires. While those campaigns may be bloated, overmanaged and remote, Richardson has the potential to be small and nimble.

Furthermore, he could generate waves of free media the way John McCain did in 2000. He’s a reporters’ favorite — candid, accessible and fun to be around. “I’m a real person, not canned. I don’t have a whole bunch of advisers. I’m a little overweight, though I’m trying to dress better,” he told me last week. So far, rumors of personal peccadilloes are unfounded.

Finally, there is the matter of his personal style. This is his biggest drawback. He’s baggy-faced, sloppy (we like our leaders well groomed), shamelessly ambitious and inelegant. On the other hand, once a century or so the Democratic Party actually nominates somebody the average person would like to have a beer with. Bill Richardson is that kind of guy.

He is garrulous, amusing, touchy-feely (to a fault), a little rough-edged and comfortably mass-market. He’s Budweiser, not microbrew. It doesn’t hurt that he’s Hispanic and Western.

In short, when you try to think forward to next winter, you see that this campaign will at some point leave the “American Idol”/“Celebrity Deathmatch” phase. The Clinton-Obama psychodrama may cease to fascinate while the sheer intensity of coverage will create a topsy-turvy series of revolutions.

I wouldn’t bet a paycheck on Richardson. But I wouldn’t count him out. At the moment, he’s the candidate most likely to rise.