Home » Bush continues to show his true character
Previous Next 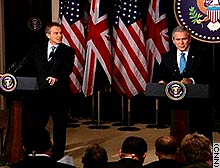 President Bush moved quickly on Thursday to distance himself from the central recommendations of the bipartisan Iraq Study Group: pulling back all combat brigades over the next 15 months and direct talks with Iran and Syria.

One day after the independent panel rocked Washington with its bleak assessment of conditions in Iraq, Mr. Bush met at the White House with his closest ally in the war, Prime Minister Tony Blair of Britain. The president said afterward that the United States needs “a new approach” in Iraq and that he would “seriously consider” the report, but was unlikely to accept all of its recommendations.

At the other end of Pennsylvania Avenue, the co-chairmen of the panel, James A. Baker III and Lee H. Hamilton, called on Congress to exert pressure on Mr. Bush to accept the report in its entirety. Mr. Baker told the Senate Armed Services Committee that the White House should not treat the report “like a fruit salad,” while Mr. Hamilton complained that Congress had been “extremely timid” in overseeing the war.

But Mr. Bush, in his first extended comments on the study, pushed back. With Mr. Blair by his side, the president said he needed to be “flexible and realistic” in considering troop movements, and made clear he would impose preconditions for talking to Iran and Syria that neither side is willing to accept. He was especially animated in describing what he said would be the consequences of a failure to stabilize Iraq, saying that future generations of Americans would be put at risk.

The back-and-forth came as the Pentagon, State Department and National Security Council moved ahead on their own reevaluations of policy in Iraq. The president expects to receive reports from each over the next week to 10 days, and plans to speak to the American people sometime before the end of the year about what both he and the Baker-Hamilton commission are calling “the way forward” in Iraq.  more

I don’t think that I’m going overboard when I say that President Bush has considerable difficulty saying, I’m wrong.  Excepting the recommendations of the Iraq Study Group would be an admission of wrongdoing.  Personally, I was extremely surprised when he fired Secretary of Defense Donald Rumsfeld.  Again, an admission of wrongdoing.Will President Bush except the fact that he needs to do more than fire Rumsfeld to fix Iraq?  I don’t know.  President Bush has been extremely consistent throughout his presidency.  He almost never changes course.  He almost never admits defeat.  On the other hand, he almost never learns from his mistakes.  The reason that he was elected Governor of Texas was because he did learn from his mistake when he ran for Congressman in Midland, Texas.Many progressives believe as I do that Robert Gates gives President Bush a six to 12 months buffer.  By changing the secretary of defense, President Bush can say that he is trying to change without changing a strategy.  President Bush now has the ability to point to Robert Gates, the Iraqi study group, the recommendations of the State Department and the Pentagon as evidence that he is willing to listen to other ideas and change direction.President Bush likes to win, at all costs.  I believe, in the end, he will change course in order to declare victory.