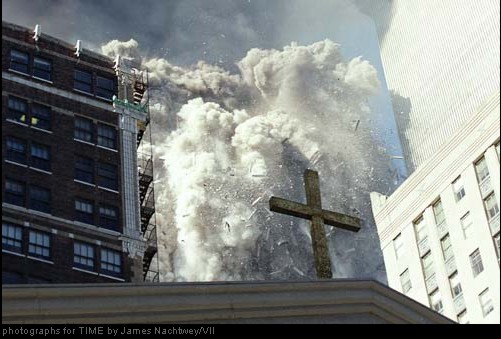 Before 9/11, I did know something about Osama bin Laden.  I had read a little bit about the bombings in Africa.  I knew about his fatwa.  I knew that he was serious and determined.  Since 9/11, I’ve tried to become more aware of national events and of politics.  I tried to pay a little bit more attention to our politicians and to what they are saying.  Before the 2004 election, I became very aware of the political atmosphere.  But that is another story.

Although a ton of questions have been answered, many questions remain.  The 9/11 Commission Report, which concluded that Americans lacked imagination, was just too simple an answer to a very complex question for me to be able to swallow it.  I do not believe that missiles were fired at the Pentagon.  I do not believe that there was a huge conspiracy.  But I do think some information was withheld from the public.  Information more damaging to the Bush administration than the August 6 daily briefing.

I do believe that immediately after 9/11, many promises were made.  Promises of security.  Promises of taking the fight to the enemy.  Promises which over time have morphed into something completely different than the original statement.  Why is Osama bin Laden still walking around, free?  Why hasn’t the leadership of the Taliban been arrested or killed?  Why aren’t we still actively pursuing bin Laden with 10 to 20,000 troops?  Why have our priorities changed?

Five years ago, I would’ve never thought that anyone would’ve tried to politicize this horrific event.  Yet I’ve seen the tragedy of 9/11 politicized in 2002, 2004 and again here in 2006.

Finally, in this week’s Time magazine, there’s an interesting interview with Kristin Breitweiser.  She is one of the 9/11 widows that was so vilified by Ann Coulter.  She was asked by a reporter, will you visit ground zero to memorialize your husband, Ron, on the fifth anniversary of his death?  Her answer was thoughtful and sobering.  She said, “I typically spend the 11th along with my daughter, Caroline.  We usually just go for a walk, either on the beach or in the woods, and take the dog for a swim.  We really don’t talk to anyone on the phone.  We just have a quiet day just for ourselves.”  Maybe that’s what we should do.  Have a quiet day of reflection.