Walter Reed ain't the only military hospital with problems

Walter Reed ain't the only military hospital with problems 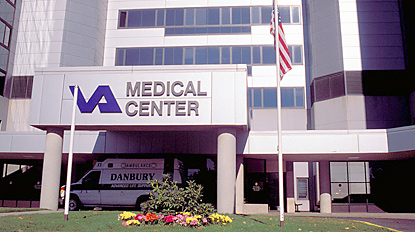 Let’s not forget that the Bush administration has tried to cut the budget for the VA every year that they have been in office.

The Washington Post is reporting that VA’s across the country have problems.

A review by the Department of Veterans Affairs of 1,400 hospitals and other veterans care facilities released yesterday has turned up more than 1,000 reports of substandard conditions — from leaky roofs and peeling paint to bug and bat infestations — as well as a smaller number of potential threats to patient safety, such as suicide risks in psychiatric wards.

The investigation, ordered March 7 by VA Secretary Jim Nicholson, found problems such as rugs loaded with bacteria from patient “accidents,” ceiling and floor tiles with asbestos that needs to be removed, as well as exposed pipes and other fixtures from which mental patients could hang themselves.

“We are committed to being upfront in identifying issues, and we are managing to correct them,” said Louise Van Diepen, chief of staff of VA’s Veterans Health Administration. “I am pleased that we are managing it aggressively, and most represented wear-and-tear issues, as opposed to the Walter Reed situation,” Van Diepen said, referring to the squalid conditions at an outpatient-care building at Walter Reed Army Medical Center, which prompted the VA review.

VA officials said that with such a large network of facilities — encompassing nearly 150 million square feet of space and serving 1 million patients each week — it was not surprising to find maintenance concerns. They concluded that 90 percent of the issues were routine, while 10 percent involved more serious problems, and that the department’s $519 million maintenance budget this year should address the “shortcomings.”

Plans for fixing the facilities were outlined, with some taking days or weeks and others requiring years of extensive renovation of buildings dating to the 1920s. In some facilities, the needed repairs were widespread. For example, at a facility in Little Rock, 30 percent of the patient areas’ walls and halls need to be repaired, patched and painted.

Staffs at other facilities raised concerns about patient safety. The hospital in Amarillo, Tex., cited problems with fire and smoke alarms, while several others described leaks that have created either mold or the potential for mold, in addition to air-quality problems.

More troubling, at least three mental health facilities — in Philadelphia; Montrose, N.Y.; and Fayetteville, N.C. — reported the need for renovations to remove suicide hazards such as hand rails and certain plumbing fixtures. The inpatient psychiatry unit in Philadelphia is scheduled for renovation at the end of this fiscal year, and until then “constant attention will be given to ensure cleanliness and patient safety,” the facility said.

“If a patient was a suicide risk, you wouldn’t want the regular shower head in the room, or Venetian blinds,” said Van Diepen. “The facilities have been monitoring that, and some require structural or plumbing changes.”

Some of the facilities were described as smelly or “filthy.” Dust, dead bugs and cobwebs were reported to be shrouding the “unsightly” entry ways at the Iowa City VA Medical Center. At the Aleda E. Lutz VA Medical Center in Saginaw, Mich., old, worn-out carpets are believed to “harbor residue/bacteria from patients’ personal accidents” and, therefore, pose a risk of infection. The hospital needs to replace 20,000 square feet of carpet with commercial-grade tiles.

The VA facility in White City, Ore., listed several problems that are common in the reports, such as peeling paint, leaks, stains, and holes in carpets and walls. “Roof leaks exists throughout the facility. We continuously repair the leaks upon occurrence, clean up any mold presence if any exists, spray or remove ceiling tiles,” its report said.

But the White City facility also reported one of the most unusual problems in the review: a large infestation of Mexican wing-tailed bats.

“We have one of the largest colonies of Mexican Wing-tailed bats in the area. Occasionally they get into the interior areas of the buildings instead of just the attics,” the report said. Eradication of the bats has been discussed but “is challenging” because of the number of colonies, it said. But the facility found it beneficial that “the bats keep the insect pollution to a minimum.”