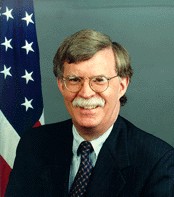 President Bush reluctantly accepted the resignation of the United Nations ambassador, John R. Bolton, on Monday, conceding that the envoy could not win Senate confirmation and signaling that the administration was unwilling to make another end run around Congressional opponents in order to keep Mr. Bolton in his job.

Ending more than a year of controversy surrounding the blunt-spoken ambassador, Mr. Bush issued a strongly worded statement excoriating Mr. Bolton’s opponents on the Senate Foreign Relations Committee for refusing to send his nomination to the Senate floor for a vote.

“They chose to obstruct his confirmation, even though he enjoys majority support in the Senate, and even though their tactics will disrupt our diplomatic work at a sensitive and important time,” Mr. Bush said. “This stubborn obstructionism ill serves our country, and discourages men and women of talent from serving their nation.”

Mr. Bush went on to praise Mr. Bolton, a fiery conservative and longtime critic of the United Nations, thanking him for his “advocacy of human rights and human dignity.” more

A little foolishness from CNN’s Moos on Bolton.