Black Quarterbacks in the NFL

Home » Black Quarterbacks in the NFL
Previous Next

Black Quarterbacks in the NFL 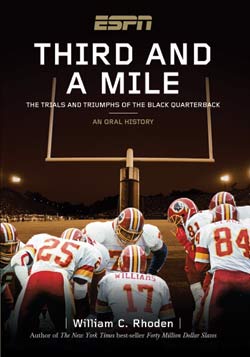 A new book is going to tell their tale – 3rd and a Mile.  Here’s a short excerpt.

EDITOR’S NOTE: William C. Rhoden’s new book, “Third and a Mile: The Trials and Triumphs of the Black Quarterback,” an oral history, is now available from ESPN Books. This excerpt from Chapter 5 examines the fitful start to the 12-year NFL career of James Harris, who was drafted in the eighth round by the Buffalo Bills after an outstanding career at Grambling from 1966-68.

James Harris: They didn’t draft me the first day. All these guys I’d played against in the SWAC were getting picked. What chance did I have? I decided I wasn’t going to play. Coach called me and said he wanted to talk. We went out to the bleachers, just me and him, sat down, and I told him that being from the segregated South, understanding that no blacks were playing quarterback, I couldn’t see any reason to go to Buffalo. He said, “I know you can play quarterback in the NFL. The decision is yours, but if you don’t go, if guys like you don’t go, it’s going to be that much more difficult for the next guy.” That touched me.

Jimmie Giles: Coach Robinson always talked about living in America. If you want something, you’ve gotta understand how to go out and get it. He was not a negative person, always positive. Willie Davis, former Grambling defensive end: No one was better than Coach Robinson at convincing you that somehow you could do something. I can still see and hear him saying things meant to prepare you for whatever challenge you faced.

James Harris: I made a commitment, threw balls ’til my arm got sore. They always talked about the down-and-out in the NFL, so I went to the park nobody there but me to test myself. I was going to throw at this tree blindfolded. I figured if I hit the tree, I’m ready. If I miss the tree, I’ve got to walk and get the ball. The first time I tried, I missed. The ball was way downfield. I debated about trying it again. I dropped back and threw, heard the ball hit, and something went through me gave me all the confidence in the world.

James Harris: Coach was doing my contract. This guy comes to Grambling and offers me a $1,500 bonus. He wants to watch me throw. He goes off to make a phone call. Comes back and tells me, “I called and told them you’re better than we thought.” Offers me $500 more. Coach thought about it. Told me to get up to Buffalo and work out because there were other players there. Told them I wasn’t supposed to talk contracts. When I got there, they picked me up and took me to this office. First thing they tell me is that I’m going to play receiver. Now, when I stepped into that office, I’d never had a conversation with white people before. The general manager, the director of personnel, they have these white shirts and ties. Coming from the South, I didn’t look anybody in the eye. I looked down at the floor. They said they needed me to sign this contract. If I didn’t, I was going to have to go to Canada. I wasn’t going to get any more money, they said. My coach was asking for too much. They’ve got the papers out, the pen. What do I do now? I tell them I need to call my mama. They said go ahead. I called Coach. I don’t know what he told them, but they backed down. We eventually got that thing up to about an $8,000 bonus and a $15,000 salary.

Jerry Izenberg: Eddie and I were on the phone that day. This is when Eddie decided James was going to have problems. They brought him in for an early camp, and, according to Eddie, they had three quarterbacks. The first two lived at a hotel, and James was in the YMCA.

James Harris: They took me to my room. Had me staying at the YMCA for six dollars a night. When O.J. came to town, he was staying in a suite at the Hilton. They gave me a job, working in the equipment room, putting laces in shoes. I didn’t know if this was part of the game or what, but I decided not to tell Coach Robinson about it. I didn’t want to put all this pressure on him. He was doing enough.

Marlin Briscoe: Shack and I shared an apartment together. We had a lot of time for conversation about our experiences. You could tell he was very uncomfortable. Everything was new to him. He was so quiet around training camp, people thought he couldn’t communicate. All of the blacks on that team O.J., Max Anderson, and Haven Moses all of us lived in the same building. When Shack got home, he was completely different. When he got home, he was laughing and joking and telling these funny stories. He was one of the smartest people I ever met. But because of his demeanor, a lot of players in Buffalo didn’t see him as a leader the way they thought a leader should be.

James was not outgoing or gregarious on the field. I think he was trying to watch himself, monitor himself, make sure he did the right things and said the right things. It was completely different for him and me only because of previous cultural experiences, the way we grew up. That was one of the reasons it was so much more difficult for him to make the transition than it was for me.

James Harris: I wouldn’t get any work in during practice, but they’d keep two or three of us afterward to throw. That was my time. I was ready for it. Every night, I stayed in and studied. I wasn’t going to let them say black quarterbacks were dumb. Then I pulled a muscle in my stomach.

Back in those days, if you got hurt, they were going to cut you. Every day, about five or six in the morning, they’d knock on the doors. You’d hear it down the hall. They’d knock on the door — bam, bam, bam. That meant they’re cutting you. My room was in the middle. In those days, they cut every day. So you’re lying in bed and you hear them skip over your door, and you know you made it another day. You got twenty-four more hours.  (more…)