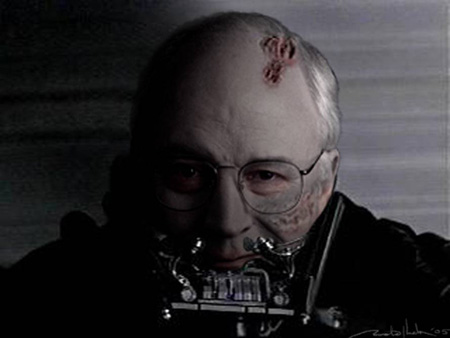 Although I have no love for Cheney, I would like to see him safe and sound for years to come as we Dem’s dismantle his tax cuts and completely debunk his foreign policy.

I thought that the picture could lighten up an otherwise somber topic.

A suicide bomber attacked the entrance to the main U.S. military base in Afghanistan Tuesday during a visit by Vice President Dick Cheney, killing at least 14 people and wounding a dozen more. The Taliban claimed responsibility and said Cheney was the target.Cheney’s spokeswoman said he was fine, and the vice president later met with President Hamid Karzai in the capital, Kabul, before leaving the country.

It was unclear why there was such a large discrepancy in the reports.

Associated Press reporters at the scene said they had seen the bodies of at least 12 people carried in black body bags and wooden coffins from near the base into a market area where hundreds of Afghans had gathered to mourn.

However, a purported Taliban spokesman, Qari Yousef Ahmadi, said Cheney was the target of the attack.

“We knew that Dick Cheney would be staying inside the base,” Ahmadi told AP telephone from an undisclosed location. “The attacker was trying to reach Cheney.”

Ahmadi said the attack was carried out by an Afghan called Mullah Abdul Rahim from Logar province.

The explosion happened near the first of at least three gated checkpoints vehicles must pass through before gaining access to Bagram.

The sprawling base houses 5,100 U.S. troops and 4,000 other coalition forces and contractors. High security areas within the base are blocked by their own checkpoints. It was unclear how an attacker could expect to penetrate the base, locate the vice president and get close to him without detection.

“We maintain a high-level of security here at all times. Our security measures were in place and the killer never had access to the base,” said Lt. Col. James E. Bonner, the base operations commander. “When he realized he would not be able to get onto the base he attacked the local population.”

It was not the first attack apparently aimed at a top U.S. official in Afghanistan. In January 2006, a militant blew himself up in Uruzgan province during a supposedly secret visit by the U.S. ambassador, killing 10 Afghans.

Khan Shirin, a private security guard, sobbed near the dead body of his relative, Farvez, a truck driver and the representative of transport association that hauls goods for the U.S. base. Shirin said many of the people killed were truck drivers waiting to get inside the base.

Ajmall, a shopkeeper, said the “huge” blast shook a small market where he has a stall about 500 yards from the Bagram base. Ajmall, who goes by one name, said those wounded in the blast were taken inside the U.S. base for treatment.

One of the dozen U.S. soldiers standing guard near the blast site said that most bodies had been returned to their families, and that some may have died of their wounds at the military hospital.

“It’s a bad, bad day,” said the soldier, who declined to give his name.

South Korea’s Defense Ministry said one of its troops stationed in Bagram, Sgt. Yoon Jang-ho, 27, was killed in the explosion. South Korea has about 200 engineers and medics in Bagram.

Cheney, who spent the night at Bagram, left the base about two hours after the 10 a.m. blast. The explosion sent up a plume of smoke visible by reporters inside the base traveling with Cheney, and American military officials declared a “red alert” inside the base.

Earlier, he ate with soldiers, telling reporters that “breakfast was excellent” but making no other comments.

In Kabul, Cheney was met by armed guards with guns drawn on the tarmac and was rushed by ground convoy to the presidential palace, where he and Karzai walked a long receiving line and past oriental rugs laid out on the wet, stone pavement.

Cheney and Karzai were expected to discuss the surge in violence in Afghanistan. Five years after their fundamentalist regime was toppled, Taliban-led militants have stepped up attacks and Afghan, U.S. and NATO forces are bracing for a fresh wave of violence in the spring.

There were 139 suicide bombings last year, a five-fold increase over 2005, and Maj. Gen. David Rodriguez has said he expects the number of suicide bombs to rise even further in 2007.

NATO-led troops patrolling the city also fatally shot a civilian who drove too close to their convoy, police said, the third such fatal shooting this month. Squadron Leader David Marsh, a military spokesman, said soldiers had given signals for the car to stop but that it kept approaching.