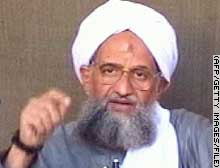 Where’s Ben?  Why haven’t we silenced this knucklehead yet? Oh, now I remember we diverted resources away from chasing down this murderer and toward Iraq.  That’s right.

“Those who try to liberate Muslim land through elections … will not liberate one grain of sand of Palestine,” Ayman al-Zawahiri said in video footage aired first by the Arab-language Al-Jazeera television network.

“Their efforts will only result in creating a reversion to jihad and will negatively affect the (current) struggle of mujahedeen,” al-Zawahiri said.

The top deputy to al Qaeda leader Osama bin Laden called Palestinian Authority President Mahmoud Abbas “America’s man in Palestine” and indirectly appeared to criticize Hamas leaders, without naming them, by asking: “Why didn’t they ask for an Islamic constitution for Palestine?”

Abbas, and his Fatah party, is locked in a power struggle with the ruling party, Hamas.

Al-Zawahiri’s statement comes shortly after Abbas’ most recent call for new elections — in which he hopes to replace Hamas with his more moderate Fatah.

The banners on the new al-Zawahiri video carry the name “As-Sahab,” the same company that has produced previous al Qaeda tapes.

According to the advertisements, the message was to be titled “the truth about the conflict between Muslims and infidels.”

Additionally, multiple radical Islamist Web sites had recently advertised that a “new message” from al-Zawahiri would be released “soon.”

The last video of al-Zawahiri aired Sept. 29. In the video he accused President Bush of being a “deceitful charlatan” who lied to the American people about the situation in Iraq.