Yesterday, the president spoke at the University of Miami and basically defended a balanced approach to solving our energy crisis. He was 100% correct in pointing out that simply drilling here, there and everywhere is not an answer to our problems. Instead we need to invest in developing all forms of alternative energy. Some progressives had a problem with the fact that he did include nuclear power in the discussion. Personally, I think we need to back away from nuclear power. I believe that we must actually have a solution as to how we’re going to get rid of the nuclear waste. Simply burying it in a big hole is fine for Wiley E. Coyote, but it’s not a real energy plan.

Sometimes, I find humor in these debates. The fact that Ron Paul continues to let himself be treated as the crusty old grandfather who really has nothing meaningful to say in the debate I find amusing. I also find it funny that it surprises people that Newt Gingrich says something outrageous and attacks the media. Not only is it not surprising, it should be expected. The stupidity of Newt Gingrich’s infanticide comments cannot be overemphasized.

Every now and then, you know it must suck to be the president. You are responsible for so much and yet so much is out of your control. Recently, we had another burning of the Koran in Afghanistan. How does this happen? We know exactly what the response will be – angry mobs which will turn violent. In my humble opinion, there is simply no excuse for us to be burning Bibles, the Torah or the Koran. The fact that Newt Gingrich is outraged that we apologized for this ridiculous act of thoughtlessness should not surprise anyone.

Sears is dying. It has been on life support for some time. I’m not sure that smart commercials are going to save it.

GOP is losing women voters. Dems seem to be winning.

Several lawmakers received threatening letters containing white powder. This should remind all of us that, in spite of spending billions of dollars on security, we still really are not safe. By the way, Jon Stewart and Stephen Colbert received the envelopes, also.

A 10,000 year old carving was found in Brazil. It is thought to be the oldest human carving in America.

The Department of Homeland Security has been tracking Americans on social media, despite having told Congress they weren’t really doing that.

Representative John Sullivan (Republican – Oklahoma) formally apologized on Thursday after he was said that he would need to kill members of the Senate in order to pass the Republican budget. An apology is all that is needed? Now everything’s okay?

By the way, did you noticed in Obama’s speech that he pointed out that the United States is producing more oil today than at any time in the last eight years? Where is the harsh and vicious retort from Republicans? Where are the accusations that president Obama is a liar and a communist? Crickets.

What’s on your mind?

A Time for Reflection – More Than a Decade of War I know that we’ve intermittently talked about this before, but now seems to be a perfect time to discuss our wars with Iraq (our troops are coming home, finally) and Afghanistan. Make no mistake, we were definitely attacked on September 11, 2001. A group of 19 terrorists with the aid of Osama bin Laden, Al Qaeda and the Taliban took down the World Trade Center, tore a huge hole in the Pentagon and crashed an airliner into a rural portion of Pennsylvania. We now know that these acts of terrorism set in motion a cascade of events which have cost the American people well over $1.5 trillion. 6200 American soldiers have died. Tens of thousands of American soldiers have been wounded. What did we get in return? 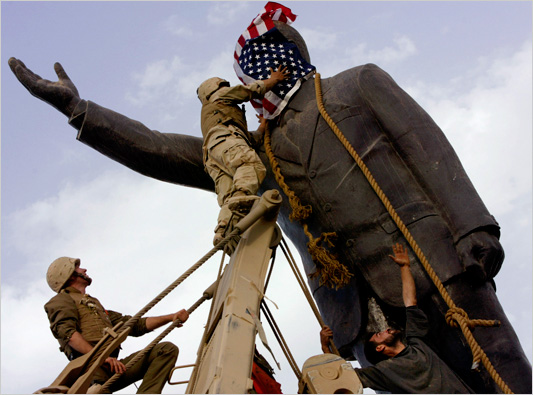 When you invest blood and sweat into a project, you should at least hope to get something out of it. Stability in the Middle East? A thriving economy in Afghanistan? At the time of the Iraq invasion, many Americans believed that we were invading Iraq in order to secure their oil. Do we have secure oil agreements in place? Did we, at least, improve our relationships with other governments in the Middle East?

Some of these questions don’t really have answers. Others of these questions do have answers and the answers, unfortunately, are depressing. We spent a lot of time and effort and nearly destroyed our military in the process. We have simply the death of Osama bin Laden and several of his lieutenants to show for our efforts. Questions like whether we madr terrorism worse still linger. Now is the time for us to figure out what we did wrong. We should also assess what we did right. We need to make sure that we do not repeat the same mistakes which led to the disastrous decisions to invade both of those countries. I would submit that we could have infiltrated Afghanistan with a couple hundred to a couple of thousand troops with appropriate air support and eliminated Osama bin Laden and most of Al Qaeda within a matter of weeks or months. I don’t know. What I do know is that spending $1.5 trillion and losing over 6000 troops, breaking our military and getting almost nothing in return is unacceptable.