You can tell me that you are an agent of God. Okay, I will believe you, but I will also watch your actions. If you are killing children in the name of God, you are confused. The Taliban in Pakistan stormed a military school and killed over a hundred people in the name of God. They are sad and misguided.

A federal judge speaks out against mandatory sentences.

The Russian economy is imploding (more from Krugman):

It’s impressive just how quickly and convincingly the wheels have been coming off the Russian economy. Obviously the plunge in oil prices is the big driver, but the ruble has actually fallen more than Brent — oil is down 40 percent since the start of the year, but the ruble is down by half.

What’s going on? Well, it turns out that Putin managed to get himself into a confrontation with the West over Ukraine just as the bottom dropped out of his country’s main export, so that a financing shock was added to the terms of trade shock. But it’s also true that drastic effects of terms of trade shocks are a fairly common phenomenon in developing countries where the private sector has substantial foreign-currency debt: the initial effect of a drop in export prices is a fall in the currency, this creates balance sheet problems for private debtors whose debts suddenly grow in domestic value, this further weakens the economy and undermines confidence, and so on.

The central bank may (or may not, as seems to be true in Russia right now) be able to limit the currency plunge by raising interest rates (now above 13 percent on Russian 10-years), but only at the cost of deepening the recession. Eichengreen et al (pdf), in a good discussion of all this in the Latin American context, give the example of Chile, which was hit very hard by falling copper prices at the end of the 1990s despite a much more favorable institutional setup than Russia right now — and, of course, without having de facto invaded a neighboring country.

END_OF_DOCUMENT_TOKEN_TO_BE_REPLACED 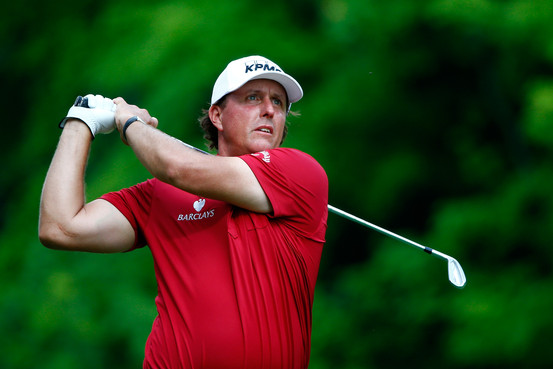 I don’t blame you if you’re confused. Last night, the New York Times and the Wall Street Journal reported that Phil Mickelson was mixed up in some sort of insider trading scandal. The FBI and the SEC were investigating. Less than an hour later, Phil Mickelson’s attorney basically states that there is no investigation. He has not been contacted by any official authorities and neither has Phil Mickelson.

The Miami Heat destroyed the Indiana Pacers to advance to the finals. Is anyone surprised?

Is Angelina Jolie a great actress? As I sit here I can think of lots of movies that she’s been in, but… lately, most of her movies range from mediocre to awful. It seems to me that it’s time for her to put together her own movie company and begin acting in truly great movies which can showcase her talents. This latest Disney movie doesn’t seem to be the right vehicle.

Because my roundup was kind of wimpy I have included a few items from Steve Benen:

* Syria: “A United States citizen who blew himself up in a suicide attack in Syria on Sunday was of Middle Eastern descent and in his 20s, and grew up in Florida, two senior law enforcement officials said. The American authorities became aware of his presence in Syria in the past year.” END_OF_DOCUMENT_TOKEN_TO_BE_REPLACED

Today’s jobs report was, to say the least, strange. The first look was exciting—288,000 payroll jobs added! Now that is the kind of job growth that would get us back to a healthy labor market relatively soon. If we were to keep up this pace, we would get back to pre-recession labor market conditions by the end of 2016. Even I could live with that.

The second look was good, too—the household survey showed the unemployment rate plunged to 6.3 percent. But I should have stopped looking there, because the rest was pretty bad. It turns out the drop in unemployment was entirely due to people dropping out of the labor force. Employment in the household survey actually declined, and the labor force participation rate fell back down to its lowest point of the recovery. Our estimate of the number of “missing workers” (workers who are not working or actively seeking work but who would be if job opportunities were strong) increased to an all-time high of 6.2 million. If those missing workers were in the labor force looking for work, the unemployment rate would be 9.9 percent instead of 6.3 percent.